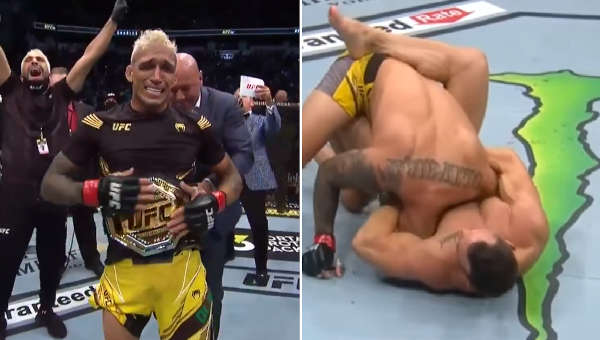 In a very entertaining and challenging fight, Charles Olivera managed to defeat Michael chandler via TKO stoppage in the second round.

The first round started with Chandler swinging at the Charles Oliveira. Oliveira tried to impost his dominance with few low kicks, but it wasn’t enough to stop Chandler from going forward. 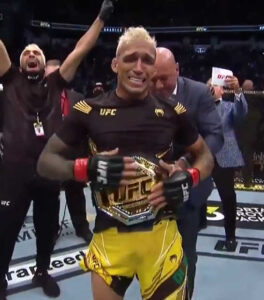 One minute into the first round Chandler clipped Olivera what resulted in Oliveira immediately lowering the level and taking Chandler down with double leg just to end up in guillotine choke. While it seemed that the guillotine choke from chandler was pretty tight, it wasn’t. Oliveira got out of it and took the back of his opponent.

Even with the tight body triangle, Oliveira wasn’t able to choke Chandler. Chandler managed to get out of back control and get the top position. They both disengaged and they were both on their feet again.

As soon as they both got up Chandler overwhelmed Oliveira with the punches. First, left punch from Chandler wobbled Olivera and the second one dropped him down. He was in real trouble while trying to survive the many strikes coming from Chandler. While first being in turtle position and then on his back many punches hit the head of Oliveira.

It seemed like such high-paced fighting from Chandler, who wasn’t slowing down at any moment will be enough to finish the fight, but Oliveira somehow “survived” it by getting the Chandler into his closed guard.

Round one was over with Oliveira lying on his back, playing the guard while pushing Chandler away.

The second round started with Oliveira tagging Chandler with the left hook, forcing him out of balance, and followed by a knee and punches that he couldn’t withstand. Chandler was dropped to the ground receiving punches without defending himself and the referee called the fight. 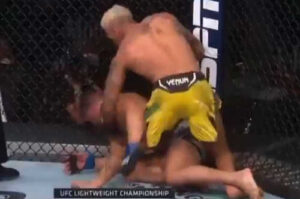 The fight is declared as the fight of the night with Oliveira receiving the UFC’s lightweight belt after nine consecutive wins in UFC.

Charles and Olivera were fighting for the UFC’s Lightweight Belt which was vacant since Khabib Nurmagomedov held it since 2018 after defeating Dustin Poirier and Justin Gaethje.