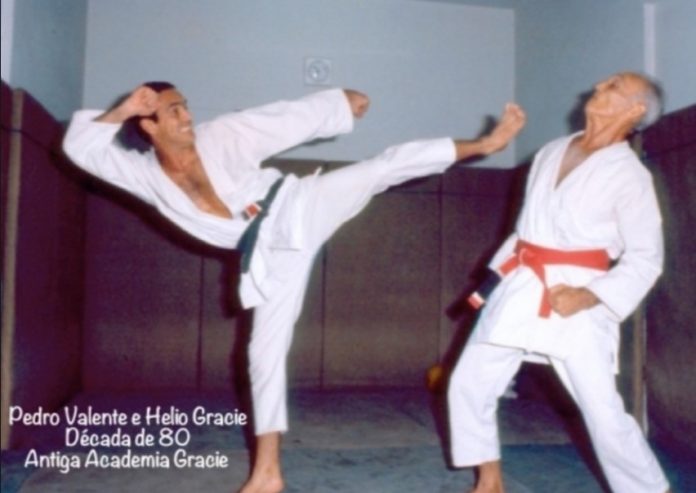 BJJ Striking. This is not something we hear very often in connection to Brazilian Jiu-Jitsu training. It is, however, something that we desperately need, an amazing martial art slowly turns into a sport. If there are any lessons to be learned from Judo and Karate, it is that “sportifying” martial arts too much takes away much of their efficiency. In terms of grappling, there’s no better art our there than BJJ. When it comes to integrating it into MMA training, Jiu-Jitsu also fits perfectly, However, when it is the other way around, and we need to bring strikes to BJJ, many high-level grapplers will lend up clueless. And this needs to change!

It is probably obvious by now that I am all for BJJ striking training. After all, striking arts and grappling arts are two separate portions of martial arts training, Granted, there is MMA, but that’s just a connection between the different types of martial arts. However, BJJ striking training needs to both be a regular feature of Jiu-Jitsu training, and it needs to take place in every single Academy across the globe. Certain schools have them feature in smaller roles. If we want BJJ to go back to being a complete martial art, we need to make it a regular practice. After all, as Combat Jiu-Jitsu demonstrates, grappling competition with striking is not just possible but also very fun to watch!

Contents hide
Grappling Vs. Striking
Striking As Part Of The Original Brazilian Jiu-Jitsu
Bringing Back BJJ Striking Training
In Summary

Let’s explore some key aspects of grappling and striking as polar opposites. Apart from the different plane of movement, there are key differences to both martial art styles. A huge case for grappling is the fact that there’s a lot less head trauma, to begin with. Granted, certain studies do point to chokes being responsible for CTE as well, but those need more time and attention. On the other hand, striking training has a shorter learning curve and provides a much more instinctual way of fighting. That means that in both competition and real-life scenarios, striking comes naturally and is inevitable. So, Apart from MMA training, how d owe prepare grapplers to face strikes nowadays?

BJJ striking is virtually non-existent as a concept in Jiu-Jitsu nowadays. For art that claims to be the ultimate one-on-one self-defense art, the lack of striking sure puts a huge question mark over that claim. Don’t get me wrong I’m involved in BJJ on a daily basis and love it. This is actually why I’m bringing up BJ Jstriking training. in the first place. the rift between grappling and striking is so big, that it takes years of MAM training to be able to bridge it. This was not the original intention of Gracie Jiu-Jitsu.

Brazilian Jiu-Jitsu, Gi or No-Gi is in danger of falling down the pitfalls of Judo. As efficient as Judo was, the ever-changing and increasingly restrictive rules have practically castrate3d an ancient martial art. BJJ is much younger than Judo, but we’re already seeing generations upon generations of grapplers that have no idea how to act when striking is introduced.

Striking As Part Of The Original Brazilian Jiu-Jitsu

Let’s be completely honest BJJ striking was a huge part of the original Gracie Jiu-Jitsu. At the time knowing how to punch and kick was just as important as knowing how to choke someone from the back. In that regard, the Jiu-Jitsu of old was very similar to the traditional Japanese Jiu-Jitsu that still exists today.

Helio and Carlos Gracie understood the value of grappling in real life altercations and exchanges. They did not diminish the importance of striking, though, Quite the contrary. The Gracies used newspapers to post infamous challenges to everyone that dared test themselves against their fighting style. At the time BJJ was known as Vale Tudo and was more of a fighting style than a martial art. Back then, Vale Tudo matches were real NHB fights, with no illegal moves. That meant that while the Gracies didn’t need extensive striking training, they certainly need to understand distance, movement, and defense at the very least. Carlson Graci is a great example of how BJJ striking can tie in with Jiu-Jitsu training to great effect.

In fact, my professor, who spent a lifetime training with Carlos Gracie Jr. taught me a very valuable rule they had. he said that when they trained BJJ, even at Gracie Barra, they always took striking into account. To that extent in every potential exchange, they’d keep count of how many times the opponent hit them. The ultimate goal, would, of course, be to take the fight to the ground. Once in BJJ territory, the rule stated that they return two strikes for each of the opponent’s strikes when standing. However, it is clear that they understood striking and knew how to match it and beat it using grappling skills. This is an ability modern grapplers sorely miss.

Most of the Gracie family members are still very keen on BJJ striking as a concept to this very day. There’s no one more vocal than Rickson Gracie on the subject. This has brought about the division of “self-defense oriented Jiu-JItsu” and sports BJJ. And in a real fight, the former is going to emerge victorious 10 times out of 10.

What Rickson advocates though, is a far cry from some of the “BJJ striking training” that takes place in gyms. Gracie Barra has a self-defense portion in their curriculum that includes “striking”. However, this is more akin to Karate training than it is the real striking. Scenarios are often unreal and centered around sports Jiu-Jitsu, providing no real-life striking experience at all.

Eddie Bravo is the best testament to how we can integrate BJJ striking into everyday training, His take on BJJ has always been one that puts emphasis on MMA. To that extent, he brought to us Combat Jiu-Jitsu, which is pretty much grappling with strikes. the striking is open hand only, but it is more than enough. Just like with grappling you need to be comfortable with striking in a realistic environment. That means getting slapped a few times before you get timing, distance, and maneuvering right.

Alliance has a black belt test that includes having to deal with striking during a live roll. It is a great way of demonstrating how important BJJ striking training as to becoming an expert in the art.

There’s no need for you to go out and challenge everyone once you ad BJ Jstriking training to your curriculum. You’re not in Rio in the mid-’90s. Safety is also not really a factor now since there are great ways of training striking without accumulating brain trauma. After all, the goal is to know how to throw a strike or two not set up your grappling. Or, know how to deal with striking until grappling becomes available.

Imagine how much more effective grappling is going to be in a street fight when striking is a regular part of the training.

BJJ Training Tips: How To Spend A Lifetime Doing Jiu-Jitsu

Want To Tap Out Less In BJJ? Here Is How