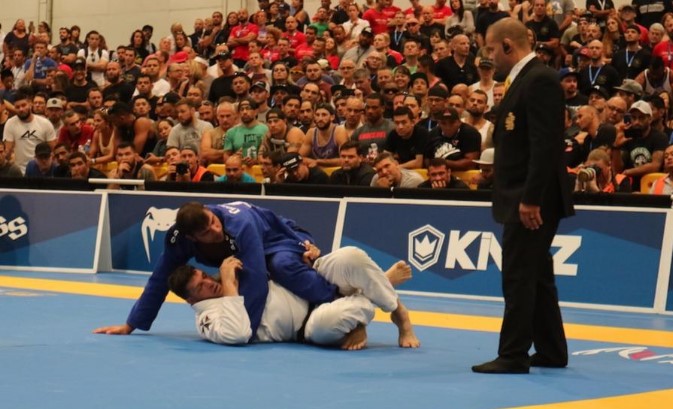 “It took less than 20 seconds for Lo to jump to guard, playing a collar grip and using his long legs to unbalance Buchecha. Lo came close to getting under Buchecha’s hips but the big man’s agility enabled him to spin out and stay on top. Two and a half minutes in Lo came close to knocking Buchecha over and scored an advantage for the near-sweep.

Lo seemed happy to work his guard, pulling again and this time working a de la riva guard. Buchecha started to control Lo’s legs and seemed close to passing, but Lo’s amazing flexibility saved him. The score became even at 0-0, 1-1 adv

Around midway through the match Buchecha seemed unusually slow in getting back to his feet during a restart, with ringside spectators asking if he was hurt or in some other way unwell. His breathing seemed labored.

Lo returned to guard, and Buchecha’s trademark explosiveness was nowhere to be seen. With two minutes left he changed tactics to a slower, heavier style of passing.

Buchecha tried grinding through Lo’s guard but the match ended dead even at 0-0, 1-1 adv. As Buchecha stood, his gi came open and he rubbed at his ribs and torso, which appeared to be taped up. ”