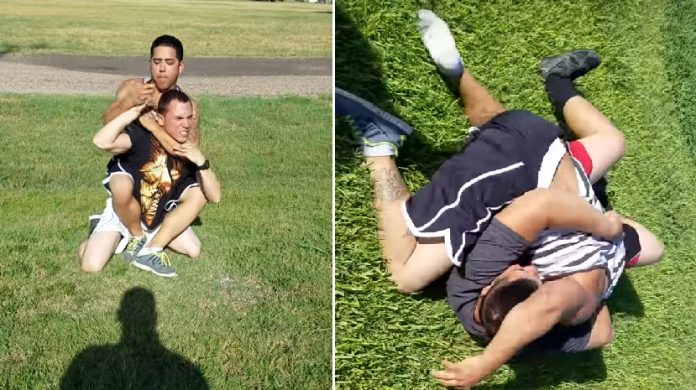 Joshua Salas posted a video of himself fighting two guys. As far as we could understand the fight happened because these guys were bullying Joshua’s brother.

The interesting part happened when Joshua was fighting the first guy. After he got on his back and choked him with a rear naked choke the other guy told him that he’s fighting a guy just because he’s smaller than him. “Fight me instead” – said the other guy

Immediately after Joshua choked a guy he went into a fight with another one. While Joshua didn’t manage to get the takedown he wanted he ended up on the ground being on the bottom. It didn’t take him much time to reverse the position and to get on top. After that, it was about the time when he will choke a bigger guy who challenged him.

When asked about belt Joshua said that he doesn’t have any belt or rank in Brazilian Jiu-Jitsu but he’s rolling for years.

Here is what Joshua said in comments underneath his video on YouTube:

“Everyone an expert behind a keyboard never did I say I was good but after a 14-hour shift in 101-degree weather just be entertained… I do wrestling, jiu-jitsu, boxing…… don’t devote all my time to one art…. so thanks for watching

Guys, I don’t like bullies and this just shows whether I’m good or not don’t instigate a fight because you never know who knows MMA. Again this anit my best and it was after a 14-hour work shift…. oss and real people who do BJJ don’t bash other BJJ practitioners….. oss long live BJJ. I am my brothers keeper and I show live to all BJJ of your a white belt or black belt respect is respect and that’s what BJJ is all about