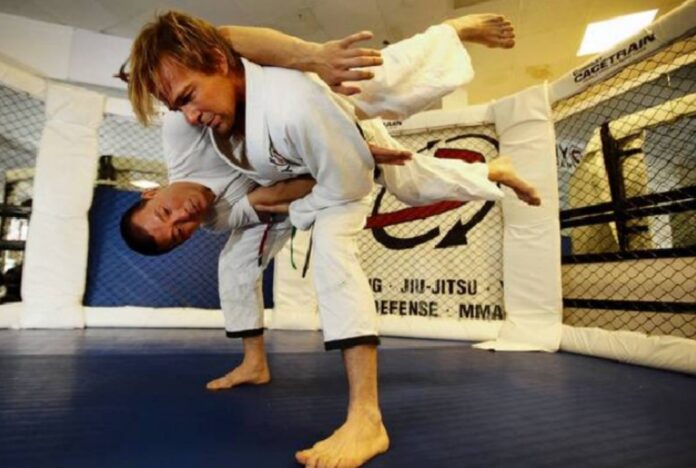 Sean Patrick Flanery is a famous Holywood actor who is not just dabbling in BJJ but is a legitimate BJJ black belt. In a recent interview for the BJJ Fanatics Podcast, the 57-year-old shared his advice on actually learning how to be good in Jiu-Jitsu.

According to Sean Patrick Flanery, the one thing you can do to get better at Brazilian Jiu-Jitsu is not waiting around to get to a brown or black belt level before you decide to study and understand the fundamentals for how valuable they are.

According to Sean Patrick Flanery, practicing a move 10.000 times is going to make your Roger Gracie-like good at that one move. Doing the same with other fundamental moves will build you a game, making it that of the GOAT. He did state the example of Roger winning both the IBJJF world and ADCC by submitting all of his opponents, using cross-collar chokes, the rear naked choke, and armlocks.

Instead of looking for flying Gogoplatas and Beribolos, Flanery advocates looking to improve your closed guard, back mount and mount, and the fundamentals submissions and escapes. Just like Roger did not get sidetracked by the fancy stuff, if you want to get good and be a good competitor, you need the reps more than anything.

In his own example, Saen Patrick Flanery says you should stick to basics like the half guard lumberjack sweep, before looking into single-leg X, Matrix guard, and other flashy stuff. Then get the sweep to where you can sweep anyone because it is all you’ve done for 20 years.

“Rediscovering that, for me, was a mindblowing moment. I thought the trap and roll was garbage as a blue belt. I was an upper blue belt thinking man, that might work on white belts, but it doesn’t, and of course, I was bridging to one side, they base out and pop. Then, once you understand the concept of how to actually bridge, and you go “oh my god, Eureka,” said Sean Patrick Flanery.

What is the best type of opportunity in the world? One that you already know is coming. Well, that is good Jiu-Jitsu. when you put something in play, going this is either going to work, or he is going to do one of these five things, and I already instinctively have my five recipes for all of these five,” concluded Sean Patrick Flanery.

When asked about starting all sparring in his gym from specific positions rather than letting students pick and choose, Flanery said that it had to do with training people to be efficient.

“If you’re on your butt, and an adversary is standing opposite of you, get up to your feet,” – said Sean.

“If a guard is not penalized, though, pull immediately. it is a 100% legit recipe,” – claims Sean Patrick Flanery. “If I wanted to design a white belt world champion, I’d teach them how to jump guard, and fight from the closed guard, that’s it.”

Sean went on to share that if that’s what you’re doing in a year, opposite to someone learning passes, submissions, sweeps, and different guards, everything else, you’ll finish most people from the closed guard.

“Once you understand things, you become unstoppable – but it takes thousands of reps,” – wraps up the popular actor who had a massive hit in the BJJ community with his latest movie “Born A Champion”.