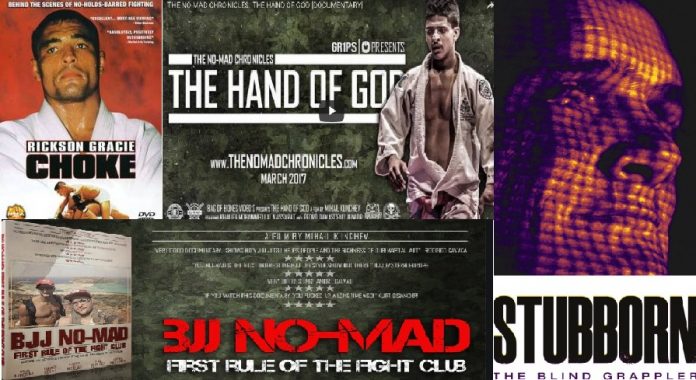 If you haven’t seen “Choke”, then I suggest you go back, find it on YouTube and watch it at least two times. Chances are, though, if you’re reading this, that you’ve probably seen this famous BJJ Jdocumaentary more than once. We all have, It is one of the gateway movies for people that get interested in Jiu-Jitsu. Watching the story of Rickson Gracie will take you from interested to crazy about BJJ. For a long time, it was one of the rare few resources that fit in the BJ Jdocumetnaries category. Lately, though, there has been a huge surge in JIu-JIsu documentaries. See them all, if you can, by all means. However, if you have no idea where to start (apart from “Choke”), let us help.

BJJ documentaries do not get nearly as much attention as other BJJ videos. INstructionals are all the jazz now, and for good reasons. However, we should not underestimate the value of BJJ documentaries. They might not offer the same level of technical insight that watching matches or DVD instructionals do. However, they do offer incredible information on understanding what JIu-Jitsu is all about, motivation, historical facts and explanations and much more. As such, documentaries are both easier to watch then instructional, and way more fun. So, get ready for a binge.

“Choke” was most definitely a unique experience when it comes to documentaries in general, not just Jiu-Jitsu ones. It’s one of the earliest BJJ documentaries ance creatively a legendary one. In those early days of the art, not many people were focused on making documentaries about Jiu-jitsu, as much as they did about certain fighters. Rickson Gracie is the focus in “Choke” for example. Still, these moves managed to capture the essence of Jiu-Jitsu and present it to the world.

Nowadays, there’s no shortage of BJJ documentaries. In fact, you can find them anywhere, form YouTube, to streaming platforms like Netflix. The “Dead Or Alive” documentary is one directed by the same director that brought us ”Narcos”. It will feature a story about the birth fo BJJ, with focus on Mitsuo Maeda and once again, Rickson Gracie. It is bound for release soon, and it will certainly be the first of many to stram on the popular Netflix platform.

For now, thankfully, you can find most new documentaries on Youtube or dedicated grappling streaming services. In any case, there’s enough material out there to spend days watching. The only real issue is that BJJ documentaries are extremely easy to binge on. And still, despite all begin good and containing important lessons, some are just better than others. To that extent, we act as a filter, bringing you nothing but the best Jiu-Jitsu documentaries that every grappler simply has to watch.

The Best BJJ Documentaries (So Far)

So far, there are a bunch of BJJ documentaries that I consider to be must-know material for anyone that’s serious about Jiu-Jitsu. Despite covering BJJ as the main subject, they all have alternate stories to tell. Some are in the format of Choke, telling personal stories about some of the most distinct grapplers of today. Others are more general ones, featuring a host of BJJ folks in order to help get the lifestyle and passion closer to everyone. Simply put, everything BJJ is covered in the following documentaries we consider to be the best BJJ documentaries, so far.

This is a really crazy great documentary and one I just had to start with. It is beautifully put together, and features so ef the best BJJ practitioner in South California. Names like Chris Haueter, Buchecha, Scott Nelson and a bunch of others. Conversely, ti was Torrance where Rorion Gracie opened the first Gracie Garage, so this is, geographically speaking, where BJJ started its worldwide spread from. Ther are invaluable insights into everything from both BJ Jsuperstar and just your everyday BJJ practitioners in this one.

This documentary is available in DVD form and it depicts plenty of the challenge fights that happened in the Gracie Garage. There are some legendary fights in there, like the first match between Rorion Gracie and Jason De Lucia. There’s also footage of Royler and Royce against Judo black belts, as well as a few of Rickon Gracie’s exploits. One of them is the famous beach brawl in Rio De Janeiro that’s simply something you have to watch.

IN terms of the best BJ Jdocumetnaries, tony Pacenski certainly made something different with his Invisible Force Documentary. Tony is a black belt under Rodrigo Medeiros. He coves lots of highly interesting stuff in his documentary, mostly in terms of Rickson Gracie’s teachings about invisible Jiu-Jitsu. Tony explains concepts like connection and the ultra basics of JIu-Jitsu, as well as covering the story of his journey. There’s also information on Rickon’s Jiu-JItsu Global Federation and many other interesting things.

Jiu-Jitsu vs. the World

I’m really having a tough time deciding between two BJJ documentaries as my favorite. “Roll” is certainly one, but its predecessor, done by the same crew called “Jiu-Jitsu vs. the World” is certainly right up there too. In fact, this one came first, if you’d like to watch things in order. Once again, the movie features a bunch of BJJ standouts, from the ever-present Chris Haueter to John Danaher, Renzo Gracie, and Paul Schernier, to name a few. That should be enough to spark your interest, and I’m not uncovering anything else.

IF you’re thinking about traveling across Brazil to train BJJ with the biggest names in Jiu-Jitsu, this is how it would look like. Or, rather, how it did, fo a while there. The people featured int Arte Suave are the likes of Jacare, Royler Gracie, Marcelo, etc. most of which are in the US now. Lots of rolling and interview in this documentary, most of them with some of the betting world champions to ever step on the mats. You’ll keep returning to this one, trust me. More importantly, there are two parts.

Kurt Osiander. If you need more motivation than just those two words to watch this movie, you should take a good look at yourself. Kurt is one of the most entertaining characters in BJJ, along with being a crazy knowledgable one. If there is only one of all the BJJ documentaries you can watch, watch this one. Saying it has some strong language is underestimating it greatly.

Anatomy Of A Fighter- the Way Of Jiu-Jitsu Mini Series

Anatomy of a fighter is a documentary about BJJ, MMA, and boxing. It is a feature type style of movie, focusing on the fighters, their coaches, the way they train, and why they love to do what they do. Expect to see the likes of Rahgad Evans. Cyborg Abreu, Royce Gracie, Cobrinha, Randy Couture, Kamaru Usman, Evander Holyfield and many more. A crazy good documentary!

This is probably the most powerful of all the movies on our list. In fact, it may not even qualify as a BJJ documentary, but it is more than worth watching. This short movie doesn’t even last 5 minutes, but you’ll be thinking about it for a long, long time afterward. It covers how BJJ can help people in need, more specifically veterans with PTSD. Watch it and then let JIu-jitsu change your life too.

There’s no way “Choke” wont’ beo n a list of the best BJJ documentaries. The reason it does not feature first is that I wrote about it earlier in the article. This is the documentary that everyone in BJJ “stumbles upon” first. In nearly two hours, it follows the rise of Rickson Gracie, from his early days, through all the training methods he did, to his Pride days of glory.

This is an upcoming documentary about one of the nuttiest things in modern BJJ. The globetrotters’ approach is one of fun and partying (lots of it). It is not the usual approach to BJJ, but their concept of traveling and training, especially the camps, works like a charm. Plus, as someone who loves their camps, I can tell you, the level of BJJtehre is as high as you’d expect it to be in any of the world’s most popular academies. Still in production but scheduled to come out this summer. Keep an eye out for it.

BJJ is taking over everything, and that includes Holywood. Currently, there are a bunch of BJJ themed movies or series in production or released. Moreover, they feature huge names like Nicolas Cage and Halle Berry. No wonder BJJ documentaries are coming in fast and loos,e as Jiu-Jitsu is conquering the world. Start by binging on t=our suggestions above. By then, it would have grown exponentially, along with all the docs we didn’t mention her. Have fun!