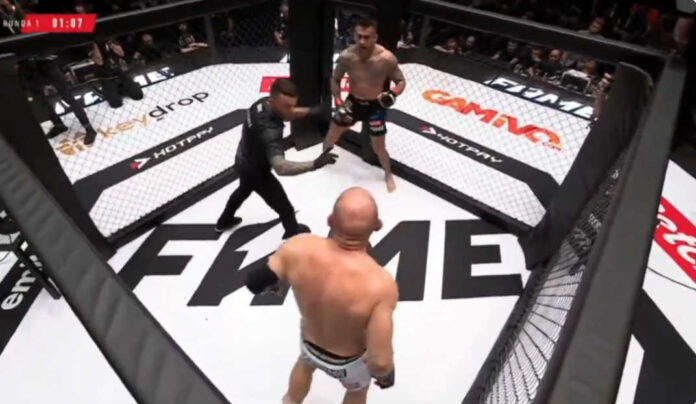 For a while, we had a feeling that the Russians were a people capable of organizing really everything within martial arts, but in recent years the inhabitants of a nearby state have surpassed them. Of course, we are talking about Poles, where MMA, thanks to KSW, has gained enormous popularity, and as a result, a huge number of martial arts promotions have emerged. In such competition, it is often necessary to come up with something that would make some stand out from others, so we have already seen quite a few unexpected rules or types of fights, as a result of which some new ideas should not surprise us.

Yet what they have made out of promoting Fame MMA is entering a new group of craze. They organized the event in front of a very well-filled hall in Gdansk, and one of the clashes was between Jacek Muranski and Arkadiusz Tankula. The names probably mean nothing to you, but we’ll reveal to you how Muranski is a 52-year-old actor who jumped into the fight instead of his son who got injured a few days before the show.

But what the organizers did for this fight is even more seen. They removed the fence of their standard arena and placed a smaller one inside it, with an area of ​​approximately seven square meters, like a slightly larger bathroom or a smaller children’s room. As the light heavyweights fought, that surface automatically seems even smaller.

It all took just over two minutes before the fight ended with the disqualification of Muranski, who bit his opponent several times. Purely to confirm the madness to the end. Everything that had happened before was one complete kind of chaos. We will not go on, look at the two videos below.

highlight of all fence grabs and bites from jacek muranski in his fight vs arkadiusz tancula at fame mma 12 pic.twitter.com/wKMzc01LIC