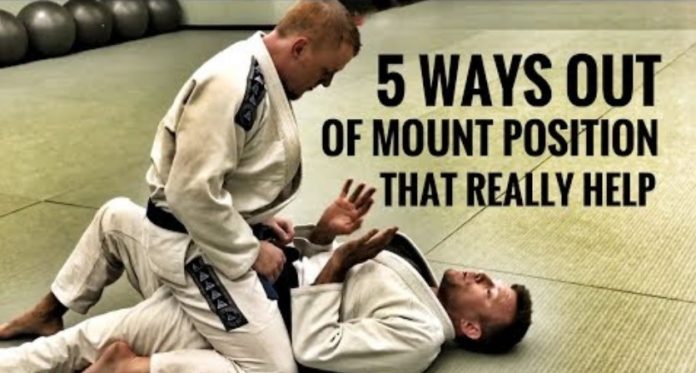 Full mount in BJJ or any other grappling martial art is the ultimate position. The only worse is back mount. So, finding yourself mounted can be a very frustrating situation to deal with. And if you’re training MMA and punches are flying toward your head it’s getting much worse. Check out these five full mount escapes and make sure you learn them.

Everyone who is new to jiu-jitsu will be dealing with full mount a lot. It’s an unavoidable position once you get into BJJ. You will be taken down easily and mounted even easier. It’s not even that bad to be mounted at the start of your BJJ career, but the problem is you’re actually losing time being mounted. You’re just lying there not doing anything. And if you don’t know how to escape it’s such a waste of time. So, you have to learn full mount escapes as fast as possible. You have to learn mount escapes so you can progress faster and that’s the most important thing.

Once you learn and master mount escapes you will do yourself a huge favor. Anyone can screw up and get mounted. It can be due to your opponent’s luck or his skill but escaping from full mount can turn the table pretty fast.

That being said, if you have good full mount escapes you can stop wasting time, survive and even get your opponent into the position he’s not comfortable in.

It’s not very common but it’s also not impossible that people escape from full mount and win a match after that. If you ever watched Garry Tonon he will even let you full mount him so he can go for your legs.

There are a lot of different ways you can get stuck underneath the full mount. In this video, you’ll be able to see some standard and non-standard ways on how to escape the mount. They’re all valuable and you have to make sure you know them all because there are different conditions in which you can find yourself.