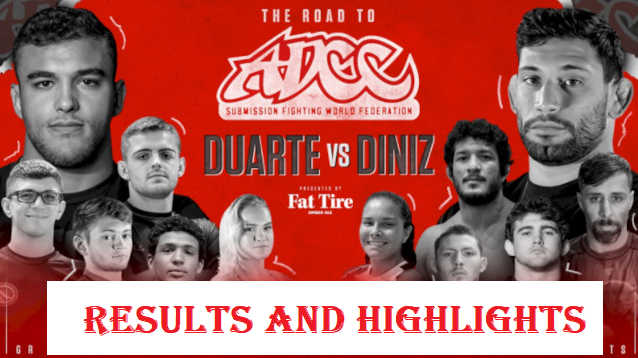 The Road To ADCC brought us some great matches between very well-known grapplers and Champions. it was streamed on Flograppling on Saturday, July 17, 2021, the event that took place was headlined by Kaynan Duarte and 2019 ADCC Champion Matheus Diniz.

The full event went without any major conflicts except for Mikey Musumeci having some bad words for his opponent Geo Martinez.

“I thought we were friends and I always rooted for him,” said Mikey Musumeci.

“And then he just completely changed his persona. I guess he cares more about followers than how he interacts with people. I have so much respect for his jiu-jitsu. As a person, I have zero respect. He should get kicked out of his gym if he acts like that in the gym or a tournament.” – Mikey Musumeci said firmly.

You can check out the results, highlights, and recap of the matches below.

The fight between Jimenez and Kade started on their feet and none of the fighters even thinking of pulling the guard. The reason behind it is that in this match guard pull would be one negative point to a puller.

The very beginning of the fight hinted that this match would be a war as it was. Both fighters were quite aggressive in the stand-up game. Collar ties were “flying” all over the place. Jimenez tried few single-leg takedown attempts without success. But, we can say that Rutolo was a bit more aggressive with his takedown attempts, resulting in a double leg takedown Jimenez.

While Jimenez was scrambling his way back to the feet Rutolo managed to do a flying armbar jumping over Jimenez. It seemed like the match will end there but Jimenez escaped the armbar and almost managed to get to the side control.

But, Ruotolo wasn’t giving the side control that easy and while trying to recover the guard he even managed to mount Jimenez.

Jimenez managed to escape from the bottom mount position and went for an inside sankaku on Ruotolo without success in submitting him. Ruotolo escaped it and was back on his feet.

From that point, both fighters were exchanging positions from top to bottom without any real attacks going on.

As soon as the clock passed the 10 minutes mark and points became applicable Jimenez took Ruotolo’s back. Soon, he was able to lock a body triangle which led to Ruotolo being unable to escape. Twelve minutes into a fight Jimenez submitted Ruotolo with an RNC.

The second match of the evening was a very exciting match between Ana Carolina Vieira (29-6-0) and Elisabeth Clay. The match was full of submission attempts from both sid, but, Vieira came out as a winner in the end.

As the match started Clay was more focused on taking her opponent down with some arm drag techniques but without success. Soon, Clay pulled the guard and started hunting for Vieira’s legs. All of that resulted in some stalling positions without any serious submission attempts and escapes from Ana Carolina Vieira.

As the application of the points began Ana Carolina Vieira got Elisabeth Clay to fight on the feet. WE can say she baited her to a stand-up match as she’s stronger there. Soon Veira took her down for 2 points and started passing her guard with a Guillotine choke. She wasn’t able to pass his guard but her advantage of 2:0 brought her victory by points.

An Interesting match happened between Lucas “hulk” Barbosa and William Tackett. Both fighters were pretty defensive on their feet. It seemed like none of them wanted to risk too much.

From that point, Barbosa was doing some high pressure with Body Lock. Tackett was defending the passes pretty well probably because Barbosa wasn’t even trying to pass Tackett’s guard with much effort until the application of the point began.

As soon as the application of points began Barbosa was all over tacket with his guard passes. High pressure with crossface and undertook was something tacket just couldn’t withstand. Barbosa was knee-cutting through Tackett’s guard too easily. It seemed like Barbosa was holding the upper body of Tackett and was just giving him guard recovery to pass his guard again up to a 34:0 lead in points.

Match ended with Barbosa winning 34:0 with 4 negative points for Barbosa for not trying to submit Tackett or doing anything more than just passing. Pretty weird strategy from Barbosa, but it worked out for him perfectly.

Musumeci then focused on entangling Geo’s leg and attacking it but that Martinez wasn’t intimidated with it as he immediately started with his own leg lock counters. Soon after it seemed like Musumeci won the leg lock game as Martinez had to escape and disengage from leg lock battle.

From that point, with around 12 minutes left, Martinez started attacking Musumeci’s guard, but without success in passing it.

As the clock passed 10 minutes mark and the application of points started both fighters were again engaged in a leg lock battle. Toe holds, ankle locks and other submission attempts were on the table but no submission happened.

While exchanging leg lock attacks Musumeci managed to take the back of Martinez and lock a body triangle. He wasn’t able to submit Martinez as he was defending relentlessly. 60 seconds before the match end Musumeci started to attack Martinez from the back as much as he could trying to apply the Rear naked Choke but without success. Martinez was able to escape the back control with standard “shoulders to the mat” escape 15 seconds before the fight end.

Musumeci won the fight via points (6:0)

The match between Nicky Ryan and Dante Leon was probably the best match of the evening. Nicky won the fight but injured his knee during the match. It’s still unknown how serious his knee damage is.

The match started with Nicky showing some nice wrestling skills. Although much known as the leg locker Nicky showed that he’s well prepared for standing game. With some guillotine choke attempts from Nicky Ryan that Dante Leon managed to escape, Nicky did a nice Double Leg takedown after about 4 minutes into the match.

From that point, Nicky was trying to attack the legs Leon. Soon he gave up top position and Dante was on his feet trying to pass Ryan’s guard but with no success. Soon, Dante Leon was trying to pass Ryan’s guard while standing very low trying to avoid Ryan’s leg attacks. That was a sign for Nicky to go for another Double Leg takedown from the bottom to reverse the position. He got into a Guillotine choke attempt from Leon but he managed to pull his head out.

With no real intentions of passing Leon’s guard, Dante Leon was able to reverse the position without any effort from Ryan to stop it. He even got negative points for a guard pull.

!0 minutes passed and the points system was up. Leon was trying to pass Ryan’s guard for a short time when Ryan lifted Leon up and Double Leg him again. Leon quickly scrambled his way on top without Ryan being able to get the points.

Few more double leg attacks from Ryan happened but he was unable to keep Leon on the ground. A few minutes before the match ended, Ryan again took Leon down with a double leg and kept him there for two points. Immediately after the takedown, he passed Leon’s guard for another 3 points.

Dante Leon managed to recover his guard and even trying to attack Ryan’s back but without success. Both fighters were back on their feet. As Ryan was limping his way to the center he was given another negative point for a guard pull.

It was pretty unclear why Ryan was limping his way to the center in the middle of the match and even when he has pronounced a winner he explained it after the fight.

He said he hurt his knee in the middle of the match when Leon sprawled on one of his double leg attacks.

The main event of the ROAD TO ADCC was a two minutes fight.

Kaynan Duarte did a good job of taking Diniz down very fast with a collar tie and leg trip. Diniz managed to get his half guard up, but Duarte quickly got into a reverse half position locking Diniz’s legs into a leg lace submission.