It is that time of the month when another Bernardo Faria BJJ instructional comes out. While Faria might not be issuing them monthly, it certainly feels like it. there are now so many of his DVDs available that you could build an entire game based on his work. And, with his background of a multiple-time world champion, why wouldn’t you want to do so? This last one was a bit unexpected, as I’ve never really connected him to the mount position very much. However, I’d look at anything Bernardo has to offer, and it proved to be a sweet deal once again, and in more ways than one. His latest instructional is the ‘Mount Attacks Encyclopedia” DVD, and it is just what the doctor ordered.

I love the fact that top-level grapplers are issuing instructional after instructional on top game tactics. From cyborgs Top Game Flow, thorough Lovato’s much anticipated Top Game Devastation to Faria’s Mount Attacks Encyclopedia, it can be very hard to choose where to starts. However, it is always better to have more than one resource, isn’t it? Why I picked up this particular DVD the moment I took notice of it is simple – I love Bernardo Faria’s instructionals. To that extent, I expected this one to tie in perfectly with the rest of his stuff, whether it is top or bottom ones. Spoiler alert – it does! Moreover, this might be the one Bernardo Faria DVD I’ll end up liking the most, along with with his Side Controл Аttacks one. Time will tell, I guess.

The Return Of the Top Pressure Game

We’re ат a point in BJJ’All Postss development where we see a lot of comebacks of things. The closed guard is one such clear example. When it comes to the pressure-based top game, it never really went away. It is not like it wasn’t popular to feel as heavy as a mountain on top of someone. Still, there wasn’t much knowledge around in the form of digital instructionals. trust me, I know because I was looking everywhere for it. How to be heavy while passing and even more importantly, when in top positions is really difficult to understand. one reason for that is that it is actually difficult to try and explain to someone how to distribute weight. I guess it takes a world champion to do it.

For me, Bernardo Faria, through his DVDs, solved the puzzle of pressure passing. Moreover, along with a few other standouts like Lovato, he rally revolutionized most top positions. For anyone looking to crush opponents before setting up submissions, Farias’s work is the place to start. It is not just about smooth transitioning and chaining different submissions together. What I learned from Bernardo was how to do it all while maintaining immense pressure from the top. And I am a featherweight grappler, just to put things into perspective. The “Mount Attack encyclopedia” was simply the next logical step.

One thing that is really important is to understand that when you’re building a pressure game, you can’t jump from one grappler’s style to another. Most of them have different ways in which they get to, retain and use pressure. To that extent, in modern BJJ, it is mostly down to either a Faria-style pressure game or a Lovoato-style one. Both are awesome, but for me, Faria’s fits better. For starters, his way of approaching things is perfect for every level. Moreover, it is very simple to understand and apply what he is saying straight away. This Mount Attacks Encyclopedia is yet another perfect example.

Despite the fact that Faria is a heavyweight grappler, you do not need to weight north of 200 lbs to use his systems. That right there is exactly what the Bernardo Faria style pressure game is all about. he has a knack of figuring out how to place yourself so that nobody can bear your weight. his Over Under passing system is notorious for this, but it doesn’t stop there. What happens after you pass? Well, Faria has the complete formula, one that includes side control, and now, mount guidelines to retain and even increase the top pressure.

let’s get all technical now and go through the Mount Attacks Encyclopedia Bernardo Faria DVD chapter by chapter. first of all, what you get is a typical Faria DVD: a four-volume set. he was the first one to popularize this type of BJJ DVDs. Today, almost all instructionals follow this pattern. This way, you get lots of instructions in a very organized manner. Each of the volumes in this instructional is about an hour long. AS usual, Bernardo has the perfect balance between the number of chapters and the length of each chapter.

He opens up with some of the nuances of the mount position, sprinkling a few submissions along the way. The second volume is much of the same, just featuring different submissions and pressure spots in the mount. Part three has all the armbar variations you can think of before the final volume covers some much-needed transitions. The number of chapters in each volume is between 6 and 8, which is just about the perfect length. Once again, progression is a big part of this DVD, so I’d advise you to start from the beginning and make your way through it.

The very first thing Bernardo Fria does is an introduction to his system. it is short, concise and entertaining. The perfect way to start a BJJ instructional. Next up, Faria spends more than half of the first volume on understanding the mount. Although only one chapter addresses this per se, he spends a lot of time offering ways to counter common mount escape attenuates. First up are knee-elbow escapes. The counters are organized in levels, depending which part of the opponent’s torso you’ll be looking to control.

Right in the middle of this first volume is a very cool Ezekiel choke setup. It is the final counter in regards to knee-elbow escapes. Moreover, it is the perfect jump to bridge escape or rather ways to counter them as well. The Mount Attacks Encyclopedia made me appreciate even more the value of simplicity. Countering the bridge with the cross choke is just about the only thing I am doing at the moment. And I’m loving the results!

In the second portion, Faria’s attention switches towards attacking, at least in the opening chapters. The first portion addresses the Americana and the ways you can tie it in with armbar attacks. The best thing is that this all works off of the moves from the previous volume, already shaping up into a neat system. There’s a lot of information here on armbars, most of which new to me. Full disclosure though, I don’t do many armbars so the level of details surprised me. There are two different ways of finishing armbars in this part of the Mount Attacks Encyclopedia DVD.

Past the halfway point of the second volume,  the focus changes again. This time, Bernardo looks at how you should go about holding the opponent’s head. It is a principle-based system, which makes it perfect for everyone, regardless of skill level or athleticism. Moreover, he offers slightly unusual ways of turning head holding to your advantage when opponents try to escape. His preferred solutions are the kesa gatame and Super Man.

The third volume moves up, in a literal fashion. This is where Bernardo Faria teaches a skill I’ve never really thought of much – climbing up the mount. Yes, there is such a thing and it is actually really important. You know how you lose armbars very often due to the space you need to travel to? Well, the Mount Attacks Encyclopedia has the solutions. Faria offers extremely useful ways of staying heavy and issuing pressure even when you climb up the mount. Plus, there are several submissions to help you along, like a really neat wristlock, for example.

Speaking of submissions, this is the volume that features my favorite one of the bunch – the reverse armbar. it is something people take for granted, but it does work like a charm! The bonus here is that I know how to be a heavy now while I’m setting it up. A cool mounted triangle wraps this part up, but not before a quick crash course on mounted Monoplatas.

This Bernardo Faria DVD was so easy to go through I never really noticed when I got to the final part. Volume four is where Bernardo addresses all the “what if” moments. This is where you’ll learn how to actually get to the mount from spots like side control, the half guard and the back mount. Apart from the usual transitions, with pressure details, of course, we also get to learn some of Bernardo’s specials. Among them, his way of getting to mount from side control, along with the folding pass to mount transitions are the two things you should keep an eye out for in this portion of the Mount Attacks Encyclopedia. A short and very informative outro concludes yet another impressive Bernardo Faria DVD. At least as far as I am concerned.

When I first saw Bernardo Faria and his DVDs, I was not really keen on them. I gave them a chance though, and never really looked back. Bernardo is knowledgeable, easy to listen to, and he never stops smiling! As much as others might have crazy levels of details or revolutionary techniques, Bernardo’s charismatically makes learning from his DVDs really easy! To that extent, the Mount Attack Encyclopedia is just as good as all his previous stuff. It ties in perfectly into the Faria masterplan and offers a great fresh perspective on advanced fundamentals from the mount. 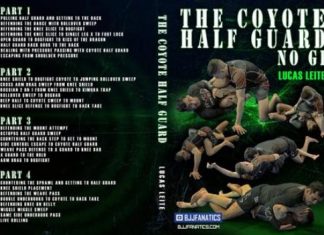 0
Not many people are aware of who created the original half guard. Conversely, apart from Eddie Bravo's lockdown, the people behind different half guard...