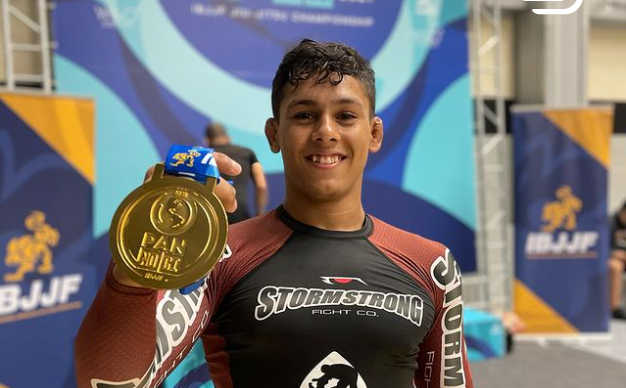 If you’ve been paying attention to the international BJJ Tournament Scene you must have heard of Mica Galvao by now. And if you haven’t you certainly could be for quite some time. But if the name is still new for you this kid’s got quite the story and buzz around him.

Some are calling him “The Brazilian Gordon Ryan”, but who is he and why is he so special?

Mica is a 17-year-old Black Belt from Manaus Brazil. Manaus is the city in the Amazon that produces some of the toughest guys in the sport of Brazilian Jiu-Jitsu like Ronaldo, Jacare, Souza, Alexandre Ribeiro, Walid Ismail, and many others.

Mica got his brown belt from his father Melky Galvao who is the head coach of the Dream Art academy in Manaus. Dream Art academy, also, has another location in Sao Paulo, Brazil led by Izak Maez, and is one of the first-ever pro sports teams in BJJ.

Mica Galvao is also a Black Belt in Brazilian grappling art Luta Livre and trains extensively in Judo and Wrestling to help his overall grappling game.

Dream Art is a part of the Alliance team and Mika was affiliated with Cobrinha Charles over the years but has recently relocated to Miami to train with Team Fight Sports.

Now you may be wondering “what’s so special about him?”

Well, when he was in his early teens he was tearing up the local social tournament scene and has some big wins over some of the top teenage, and juvenile athletes from around the world. After he went back to Brazil from the US, and after being promoted to blue belt Mica made a public challenge where he wanted to test himself against the BJJ Black Belts.

This sent shockwaves in the local Manaus Jiu-Jitsu scene as some people thought it was disrespectful while others thought it was cocky. Soon he got someone to step up and accept the challenge.

So, at the Copa Podio Orange League Event Mica faces off against a legit BJJ Black Belt from Manaus. Mica won that fight via armbar in about seven minutes.

Since then Mica continued his winning streak at several major events IBJJF and AJP tournaments worldwide as well as more super fights against black belts.

At one point he amassed a winning streak of 100 wins mostly via submissions.

Recently he also had a challenge match where he submitted a very tough Black Belt in Gustavo Telus in 55 seconds.

His career in Brown Belt thus far has been pretty amazing as he won the Abu Dhabi Grand Slam World Pro, and the IBJJF No Gi Pan Ams. 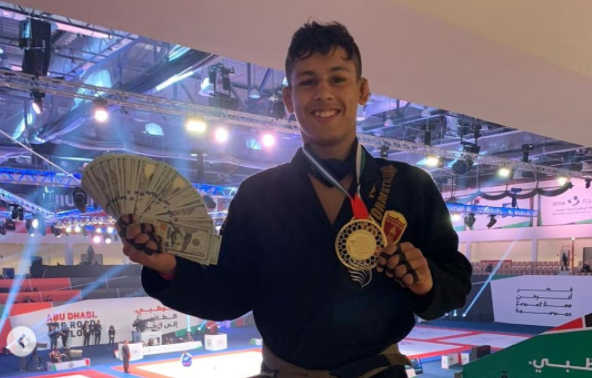 It’s not just the wins and titles turning heads about this kid. It’s the way he’s winning his matches in a very well-rounded and entertaining style while all of his wins are coming from him submitting his opponents in record time including the win at Abu Dhabi Grand Slam finals in just 28 seconds.

Today he also won three matches in a row in less than one minute each by submission before winning a final match by decision.

He also put two new DVDs on BJJ Fanatics, and we can say that he has the most buzz at the brown belt in quite some time.

Now that Mica is in the United States for a short while he there himself right into the fire as on May 28. he’ll face very dangerous Andrew Tacket on the upcoming Flo Grappling Promotion “Who’s Number One”.

Recently, he entered into some controversy as he puts his name into the next SUG promotion 170lbs bracket where he’ll be the only brown belt allowed to compete in the 8-man bracket full of legit BJJ Black Belts.

In August he’ll have an upcoming super-fight at the next BJJ Bet event in Brazil where they created an entire event and bracket opportunity for Mica. 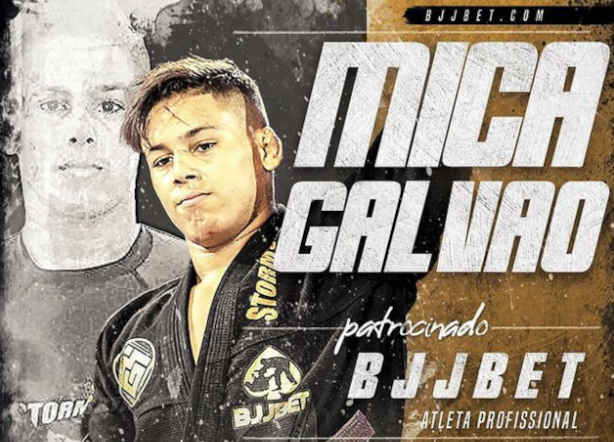 As his confidence is growing with his experience, and physical structure so is his technical prowess as he continues to look more and more impressive in each match combining a strong takedown and passing game with fluid sweeping and submission system in place.

But as Manaus Leg Locks game, specifically with Heel hooks, doesn’t seem strong Mica did not look out of his element this weekend and even winning a match via Heel Hook in under one minute.

However, if you wonder if Mica Galvao is related to Andre Galvao the answer is No. Galvao is a pretty common name in Brazil.

There do not appear to be many kings in his armor, but as the tests continue to come his way and as he continues to take them all directly, only time will tell if Mica is truly the next big thing in Jiu-Jitsu the fans and the sport have been waiting for.

Mica Galvao Becomes a Black Belt at the age of 17 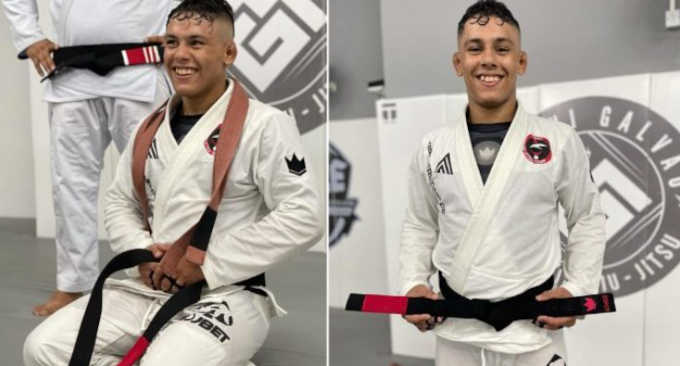 As we wrote before in this article Mica was able to beat some of the incredibly good and talented BJJ Black Belts much older and experienced than him.

Mica gave a statement on his Instagram profile following his promotion:

“I arrived where I always dreamed of and where everything begins. I thank everyone who was and still are by my side on this journey, without you guys none of this would be possible.”

“I received my JIU-JITSU BLACK BELT at 17 years of age. I have a RESPONSIBILITY to give nothing less than MY BEST to represent this belt and continue GIVING GOOD EXAMPLES in any way I can for the NEW GENERATION. God bless you all”

There’s no doubt there will be some controversy about Mica’s promotion and how is it possible someone this young can become a Jiu-Jitsu Black Belt. As far as we know there’s no real restriction on how old someone should be to achieve a Black Belt. Actually, there is no kind of measurements in BJJ to measure if someone’s knowledge is enough to achieve any belt as there are many parameters. It’s all in the eyes of an instructor.

In the case of Mica, yes, there will be people raising their eyebrows commenting on this decision, but Mica did everything that someone should do to achieve the black belt in Jiu-Jitsu.