Kids should train Brazilian Jiu-Jitsu. Plain and simple. In fact, I’d really love to see it as a part of school curriculums even. Speaking of which, there are several examples of peo[le using BJJ in schools to improve kids’ education. That said, if you’ve ever been toa BJJ class, you know how chaotic it may seem. Well, with Kids Brazilian Jiu-Jitsu classes, you can multiply that tenfold. However, it only seems as chaotic as usual, coaches have a perfect grasp over every second of the training. As one of those brave souls that teach kids BJJ, I can attest that there are different “tools” to make sure you never lose control over a kids’ class. One of the things I really think is key in building up future grapplers are games. But not just any games.

Before I coached kids in BJJ I spent about a decade doing the same for kids that trained karate. Suffice to say, there’s an insurmountable difference between the two. I get both approaches, one very traditional, the other very open. However, if you take a closer look, you’ll notice that even traditional martial arts have games in their kids classes. They might be under strict rules and masked as drills, etc., but they’re there. The “loose” nature of Kids Brazilian Jiu-Jitsu means that kids both play the games and enjoy them as such. And they’re invaluable for attaining a whole host for bringing key points closer to the kids.

The first moment you walk into a kids’ Brazilian Jiu-Jitsu class you’ll probably think “run”. Having 30+ little warriors aged 5-10 running and tumbling around in little Gis is a sight that needs adjusting to., Once you do, though there’s hardly anything you’ll look forward to than the kids’ classes. And behind all that madness, there’s actually a very clear structure. 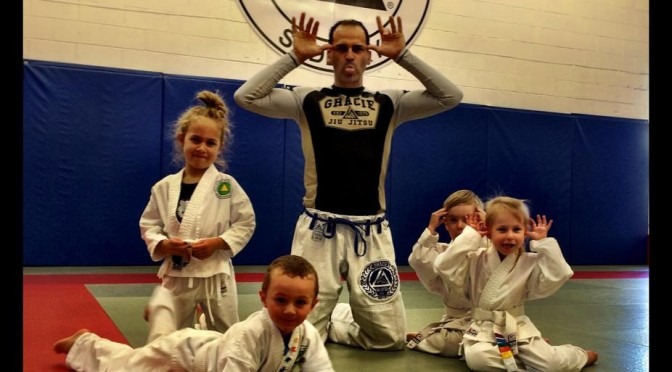 One great way of structuring a BJJ kids class is to find that elusive balance between making things seem new, while actually having the kids go through the same motions. That means you need to be fun but enforce discipline from the get-go. Even more importantly, you need to really hone in on your warm-ups, having kids do the key BJJ motions over and over again, but always with a twist that makes them curious above anything else. Speaking of which, this is the perfect time to introduce a game or two to get the ball rolling.

IN terms of organizing technique training, you’ve got countless options when it comes to Kids Brazilian Jiu-Jitsu classes. However, even then, you can either employ a game or use the structure of a game to make training techniques (which is where kids’ attention usually wanders) much more interesting. Finally, whether they’re sparring or not, the idea is to always end with some sort of a competitive drill. Once again, the perfect situation to use games and get great results.

Finally, a key point in wrapping everything up is appealing to the kids with an important “end of class message” of your choosing. Right after a great training session, and immediately after playing a game, when they’re still tired but happy and glowing is the best time to convey important educational messages to kids.

The Value of Games For Kids

When I was growing up, we used to play outside a lot more. Okay, we did our fair share of video games as well. I’m not that old after all. Still, we did spend time outside, doing stuff like climbing trees and rooftops and playing all sorts of games that involved all the kids from the neighborhood. In the modern-day, unfortunately, the lack of such games has a huge influence on how kids develop. And it is not a good one.

Games are there for a reason. People have been playing them, and coming up with new ones for centuries because they have an important role to play. Form building social ties, to teaching kids movement and coordination, aLl the way to building a competitive spirit. Thre’s also the cultural aspect of things because every spot in the world has different games. IN terms of BJJ, there’s also a culture behind everything, one that can be used to reinforce key educational points in any child’s development.

In essence, the huge popularity of video games nowadays makes real-life games fade into the disappearance. Have you tried some of the “old-school” games with your kids, or kids you coach? First, they’ll be amused but shy, perhaps afraid to try. Right after the very first go, you’ll never hear the end of it. This does not happen with video games. The role of social, physical games play in our development is irreplaceable. So, if modern lifestyle tends to take them away, why not use kids Brazilian Jiu-Jitsu classes to re-introduce them to children?

First of all, feel free to invent and experiment with all kinds of games when it comes to setting up a kids Brazilian Jiu-Jitsu class. That said, only keep in mind their age and the requirements of the game, as the only condition of success. Below I’ll outline some of the games that have the kids in my classes jump with joy when we announce them.

This is not just an ordinary game of dodgeball. You’ll need two coaches for this one, one on each and of the mats. The kids should all be in a bunch in the middle. Even if ht ball you throw touches a kid slightly, they have to go out and sit behind the coach that threw the ball. To make it more challenging and fun, try using two balls, one in each hand. Even better, do what we do – use a stability ball .it is big and bouncy, causing the kids to really develop coordination when trying to avoid it and their teammates.

This one goes well for adults as well. It is very simple and starts with the kids organized in pairs. You’ll need a line on the ground that will divide each pair. Half the kids should be on one side, the other half on the other side. From there, have them kneel in a deep squat, and start hopping in place. The goal is to use their palms only to push the kid on the other side of the line down. The trick is, the only point of contact should be the palms of both kids’ hands. It is hard, builds up strength and conditioning and requires lots of coordination and balance. Keep a score of who falls down more times and you’ll have your winner. A great drill is to rotate the pairs, simply by moving one line up or down.

Animal drills are an exceptional way of getting kids to hone in on BJJ specific movements. You can include pretty much everything you think of, although some popular choices are bear and lizard crawls, monkey hops, kangaroo and frog jumps, and chicken runs. Have the kids do them as a race, ideally in pairs. They build immense levels of coordination and build up a fighting and competitive spirit. Plus, they’re extremely fun for the kids to do! 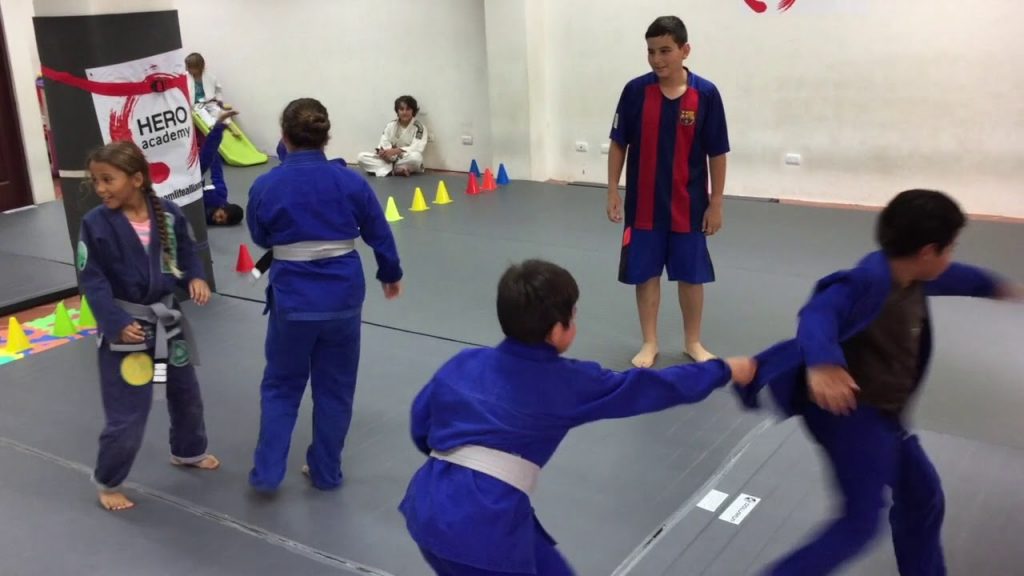 This is yet another one that can extend beyond kids Brazilian Jiu-JItsu classes. IN fact, most adults do it too, including MMA fighters. The idea is to have everyone pick a spot in the gym, and start running in place at a moderate pace. Once you shout “branch” everyone should do a sprawl, and get straight back up into running. Like evading a branch if you’re running through a forest. Shouting “hole” on the other hand is a cue for everyone to jump up, like jumping over a hole. Clearly, there’s lots of conditioning here, but also a reaction to verbal and visual cues. Feel free to mix cues up as you wish, particularly doing different things yourself while shouting. Whoever remains last is the winner. It can be done in teams as well, with the first team to be eliminated losing.

This one is a true favorite in all levels of kids Brazilian JIu-Jitsu classes. The basic vision is to have two kids, which you either choose yourself or based on winning previous games. They hold hands together and stand in the idle of the mats. All other kids are on one side of the academy. The kids have to run all the way to the other side, avoiding the “wall” who try to catch them. Everyone that’s been caught, without the wall releasing hands, becomes a part of the wall. Use a limited number of runs, and set a number of how many kids should end up in the wall during that time.

A bit more precise version is to actually give the kids in the wall tasks of who in particular they need to catch. This makes them think and plan, work as a team and develop crazy levels of dexterity.

Finally, it’s time to really include coaches in the drills. The back position is one that kids have to learn early, and they need to really master. This drill will ensure just that. Have kid catch your back, hooks, seatbelt, and everything and then stand up. Spread your arms wide at the shoulder level. The kids should then do a full rotation around your upper body without their feet ever touching the ground .the goal is to return to the back. Very difficult but extremely important and fun for the kids as well.

The games above are just a few ideas of what you can do in a kids Brazilian Jiu-Jitsu class. The important thing is to give kids what they like, while at the same time teaching them a plethora of things that extend well beyond just Jiu-Jitsu techniques. Give it a go and feel free to recommend games of your own too!

BJJ World - 0
Wrestling is one of the oldest forms of the competitive battle for humans that allows for real exchanges without the potential for damage. This...