It’s not a coincidence that Khabib is such a good grappler because from his young age all he was doing was grappling. Today he’s the most dominant wrestler in the UFC and probably in all of MMA. He holds the most impressive record in MMA of 26 wins without a single loss and 10 of the bouts are made in UFC, the most prestige MMA organization in the world. If you ever watched his fights you could see that all of his victories are coming from his great grappling skills and it’s absolutely not a coincidence.

Khabib Nurmagomedov is born in Dagestan and it’s very common for children there to start training wrestling at their early age. So was the situation with Khabib too. He started wrestling when he was 9 and was trained by his father Abdulmanap Nurmagomedov. Luckily for Khabib, his father was a wrestling athlete and veteran of the army. He was also a wrestling competitor from his early age until he started to train soldiers in Judo and Sambo in the military.

Khabib was wrestling for most of his childhood and at age of 15. When Khabib was 17 he started training Combat Sambo again under his father. According to Khabib, he had many problems transitioning from wrestling to Judo. He just couldn’t get used to GI, but his father wanted him to compete in fights with the “GI Jacket” on.

At age of 20, Khabib started to train and compete in MMA. He’s now one of the best ever in the world and everything else is the history.

In the video below you can see Khabib hitting a takedown on a bear. The same classic takedown also known as the trademark takedown of Georges St-Pierre. Enjoy! 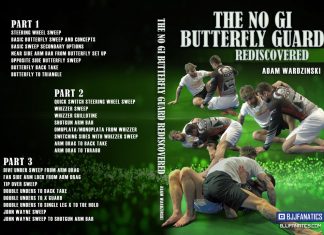 0
At first, it was Renzo Gracie. Then, it was Marcelo Garcia and Fernando Terere. Today, it is Adam Wardzinski. These are all high-level Brazilian...