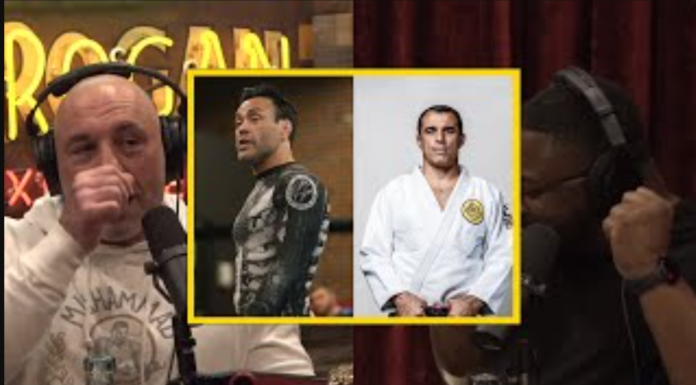 Eddie Bravo is one of the first people in BJJ of non-Brazilian origin to tap out a Gracie family member back in the early days of the sport. The 10th PLanet founder managed to catch experienced legend Royler Gracie in a slick triangle choke at ADCC when he was a brown belt, and forced him o tap, much to the delight of his close friend Joe Rogan.

We’ve seen Joe Rogan emotional on his podcast for a host of different, reasons, but this last one was quite different. Namely, the legendary podcast host and BJJ black belt reminisced again about Eddie Bravo’s historic victory over Royler Gracie on his latest JRE podcast  (#1915) with Brain Simpson.

As Joe was going over Eddie’s abilities and what it meant to be able to get Royler Gracie in triangle back then, let alone manage to submit him with it, the 55-year-old said he could cry about it at the moment and clearly got emotional:

“Eddie has crazy leg dexterity… If you’re in his guard, you’re f****d. [Royler Gracie] was in Eddie’s guard and Eddie just slapped that triangle on him and started pulling the head and Royler tapped. It was insane. I was crying. I’ll cry right now… One of the greatest experiences of my life. I get emotional right now talking about it.”

The victory over Royler Gracie launched Eddie Bravo’s brand of what’s then thought of as experimental and unorthodox no-gi Jiu-Jitsu in the form of the 10th Planet Jiu-Jitsu gym in L.A. which is now the headquarters of a worldwide 10th PLanet empire.

The legendary triangle submission happened in 2003. 11 years later, in March of 2014, the two met again, with the fight being declared a draw, as under Metamoris rules only submission in the 20-minute match counted as a victory. Eddie however, dominated Royler Gracie once again, nearly finishing him with the vaporizer calf slicer once again proving his brand of Jiu-Jitsu works.