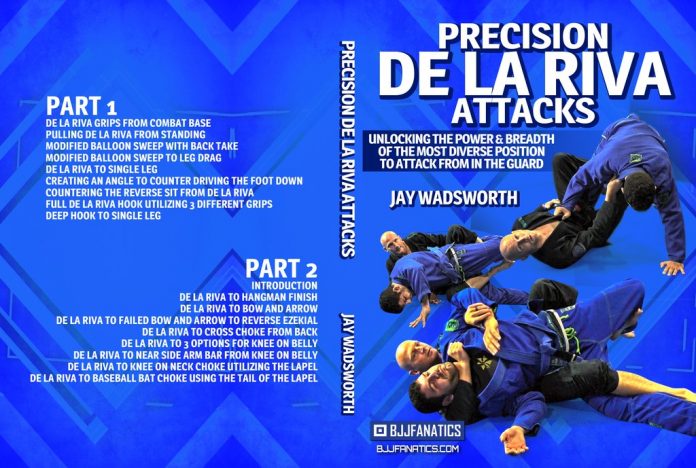 If you’re getting smashed regularly by stronger and more experienced grapplers, remember this day! This is the day you discovered the cure for all your smash passing troubles. It comes in the form of a Jay Wadsworth DVD that has the perfect silver bullet guard for you! It is a new take on an open guard classic in the De la Riva Guard. Prepare to discover never before seen secrets of the De La Riva to stop anyone in their tracks! No bull, just precise and simple instructions! 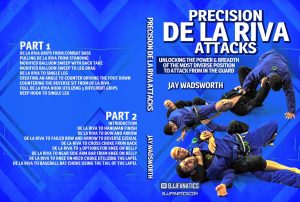 Listening to experienced competitive grapplers when it comes to specific subjects like preventing smash passing is always a good idea. Whenever that experienced grappler is also a law enforcement officer, your car rest assured what you get is the real deal. Jay Wadsworth is both of those things, and this Jay Wadsworth DVD is the instructional that unmasks the De La Riva guard once and for all. Precision attacks and a systematic game is what you’ll learn after just a few short weeks of putting the techniques to practice! Suffice to say, this is the BJJ DVD to take your open guard game to the very next level!

Why You Should Listen To Jay Wadsworth

Jay Wadsworth his a Brazilan Jiu-Jitsu black belt that has one of the most efficient grappling styles in the game! He is also a formidable competitor, often catching attention with his unique ways of winning. He is also crazy efficient off his back and has no problems dealing with people twice his size. Oh, and he’s also a police officer, so you can trust that his favorite moves really work in any circumstances.

Jay Wadsworth is one of the smart ones. he uses his Jiu-Jitsu to improve the way he does his day job – law enforcement. However, he also uses his police experience to make his Jiu-Jitsu notoriously effective! Jay is a black belt under professor Julio Fernandez. he is also a teacher, teaching Jiu-Jitsu at Kinetix Combat Sports And Fitness. He is also a certified Combatives teacher for SWAT teams and patrol officers. Oh, and he also has a dozen MMA fights under his belt.

The “Precision De La Riva Attacks” Jay Wadsworth DVD is the sum of Jay’s year’s long experience in martial arts and law enforcement. Here, he focuses on making you an attacking machine of the back using only one simple guard – the De La Riva. It is a DVD you’ll fall in love with straight away!

The De La Riva guard is an open guard variation that is not getting as much attention nowadays as it did not so long ago. When the Berimbolo and similar moves became the next big thing, the De La Riva guard was the most common guard position in Gi Jiu-Jitsu. It was the launching pad for so many attractive and efficient attacks that everyone was trying to do it! As the game changed a bit and other guard variations emerged, most people moved on to the next big thing. However, the De La Riva stays just as effective, if not more, as it was before!

Created by professor Ricardo De La Riva, this open guard has a very specific and distinct structure. he actually modified an old Judo position to fit his needs, and came up with one of the best guards ever! The De La Riva guard works by having one leg around one of the opponent’s legs. The foot of your leg has the task of hooking behind the opponent’s knee. At the same time, you’re looking to control the heel of that leg with your same side arm. The far leg is usually in the hip or hooked behind the other knee. The free arm can grip in numerous places, allowing you to manipulate your opponent.

The “Precision De La Riva Attacks” Jay Wadsworth DVD is a two-part video instructional. In each volume, Jay goes over the moves and concepts he likes to use when grappling. Basically, he offers the blueprint to unlocking the full power and potential of the De La Riva.

The first disc is all about getting to the De La Riva guard. It includes standing entries as well as entering from the bottom. jay also takes you in the opposite direction. Namely, he uses De La Riva to get back to his feet and execute powerful takedowns. There’s also a complete breakdown of the guard and Jay’s De La Riva philosophy.

The second volume is all about high precision attacks. You won’t find a lot of Berimobolo style spins and inversions, though. What you’ll learn are basic, easy and virtually undefendable ways of getting a tap. Whether it is from the guard itself, back control or after sweeping, each chapter in this Jay Wadsworth DVD finishes in a submission!

To begin with, we need to get a grasp of what Wadsworth’s De la Riva is all about. This complete volume is going to focus on how, why and when to play the De la Riva. First up, Jay goes over the best grip placement for entering the De la Riva guard. What’s really impressive is how Wadsworth pulls a De la Riva from standing. If you like to pull guard you might as well pull De la Riva guard and go on the offensive right away. Good examples of direct attacks after pulling guard would be Jay’s balloon sweep variations.

Pulling DLR, and then getting back into a single leg might not be something you consider at the moment. However, Jay makes a compelling argument as to why you should be multidirectional with your De la Riva guard. Plus, the single leg setup is sick!

Form a precise technical perspective, Wadsworth really goes deep when covering the angles. A bad angle can really cripple even the best set De La Riva. A simple principle here is going to remove all your doubts once and for all. After angles, it is all about grip combinations, and Jay offers three of them. The volume ends with an overview of the deep hook and how it affects your DLR options.

DVD 2 – Attacking And Finishing With The De La Riva

The second portion of this Jay Wadsworth DVD is attacking after attack from the DLR. After a very short introduction, outlining an attacking mindset, Jay gets straight to business. First up are chokes from the back, which is extremely easy to obtain from the DLR. The Hangman finish is a new one, followed by a cool bow and arrow setup. Jay certainly likes to finish his opponents so an Ezekiel choke failsafe is right there in case the bow and arrow choke fails.

After all the choke options, Jay demonstrates how to use the De LA Riva to obtain not just top positions, but the most dominant ones. A great example is a knee on belly position, along with the numerous attacking options from there. There’s also a pathway to the dreaded knee on neck choke which is going to tap literally anyone. And, for all those that thrive on lapel attacks, there’s a great baseball bat choke variation utilizing the tail of the lapel.

If you’re looking for a fancy way to suffer from the De La Riva guard, then this Jay Wadsworth DVD is not for you. If your goal is to have an unpassable DLR that you can use to submit everyone than this should be your first choice! Jay likes to keep things simple and effective, while not wasting any unnecessary energy. As for competitors, he likes to always take things into the highest percentage (and point reward) positions available in BJJ before going for the kill.