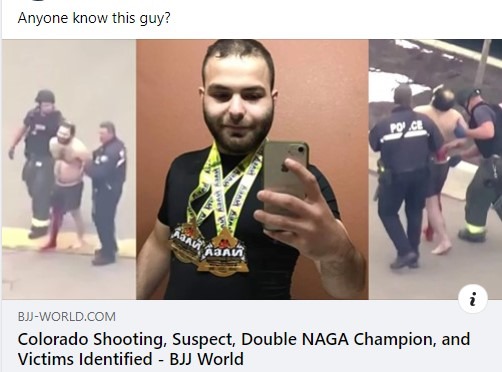 POLICE have identified a suspect in the murder of ten people at the supermarket in Colorado. It is about a 21-year-old named Ahmad Al Aliwi Alissa.

This is the Boulder shooter: 21-year-old Ahmad Al Aliwi Alissa, whose brother said he was deeply disturbed.https://t.co/OagxXh0Z4N pic.twitter.com/33QyXYdvPn

The suspect is from Arvada, Colorado and was in stable condition after sustaining a leg wound in a collision with officers who responded at the King Soopers point of sale in Boulder, about 45 miles northwest of Denver, on Monday afternoon.

He’s also Brazilian Jiu-Jitsu practitioner and competitor in grappling tournaments. As we can see in the picture above he took a selfie after winning two NAGA gold medals.

Contents hide
Who is Ahmad Al Aliwi Alissa?
John Danaher words on how Jiu-Jitsu affects people
All victims of the Colorado shooting
The motive is still unknown
Scary scenes

Who is Ahmad Al Aliwi Alissa?

According to Conan daily

Ahmad Al Aliwi Alissa lives in Arvada, Colorado, and he’s a resident of U.S. He was born in Syria and moved to the U.S. in 2002, according to his Facebook account. He is interested in computer science and martial arts like wrestling, Jiu-Jitsu and kickboxing.

He describes himself as a 138-pound grappler trying to make the world a better place. He is 13 years younger than his brother Ali Aliwi Alissa, who described him as very anti-social, paranoid, and mentally ill.

He has a sister who is 9 years older than him. She described him as nice and quiet. One day, while having lunch with his sister in a restaurant, according to Ali, he told her there were people in the parking lot looking for him but when she went out, there was no one.

On Facebook, he shared posts against gay marriage, abortion, and Donald Trump’s stance on immigration.

From March 2015 to May 2018, he attended Arvada West High School. In 2017, he was arrested and accused of cold-cocking a classmate at school. He allegedly punched the victim in the head. He claimed that weeks before the attack, the victim made fun of him and called him racial names.

As a high school student, he got bullied a lot and he would describe being chased, having someone behind him, and being looked for by someone, according to his brother Ali. (c)

He often posted about mixed martial arts and Jiu-Jitsu on his Facebook page and sometimes about Islam. In April 2016, he posted a photo of himself while wearing an Arvada West High School uniform while walking on a wrestling mat. (b) (c)

In 2018, he pleaded guilty to an assault charge in the case related to the classmate he allegedly attacked in 2017. In May 2018, he graduated from Arvada West High School.

In July 2019, he wrote on Facebook, “Yeah if these racist islamophobic people would stop hacking my phone and let me have a normal life I probably could.”

He was 21 years old when he was arrested on March 22, 2021. He was charged with 10 counts of first-degree murder. His Facebook page was deleted after his arrest.

Just like John Danaher said in his earlier interview for Newyorker.

All victims of the Colorado shooting

Authorities also identified the remaining nine victims, after it was previously announced that 51-year-old police officer Eric Talley was among those killed.

The names of all the victims have been published.
“The victims ranged in age from 20 to 65,” said local police chief Maris Herold.

The names of all the victims have been published:

“She loved her job, it probably killed her,” Jeanette said.

“She enjoyed working with people. She always looked after others and thought of others instead of herself,” added the grandmother, who had not seen her granddaughter for a long time due to the coronavirus pandemic. But Jeanette recently received a second dose of the vaccine and expected to see her granddaughter soon.

“She called me on Sunday to wish me a happy birthday and told me she loved me,” the devastated grandmother said.

The suspect was wounded and is currently being treated at the hospital, and should be transferred to the county jail today, Boulder District Attorney Michael Dougherty said.

Investigators do not yet know why the attacker started firing inside the store, Dougherty added. He said the investigation was at an early stage, but that detectives believed the suspect was the only attacker.

A police source told the Associated Press that the attacker was armed with a light semi-automatic AR-15 rifle.

Hundreds of police officers arrived at the scene during the shooting on Monday, and terrified customers and employees fled the store in a panic.

“My heart hurts today,” Governor Jared Polis said, adding that not only have we lost ten lives, but this is real horror and terror for everyone.

The motive is still unknown

“It would be premature for us to draw any conclusions at this time,” said Michael Schneider, an agent in charge of the FBI’s field office in Denver, at an information meeting on the possible motive for the killings.

As the attacker began firing, terrified customers and employees began fleeing across the store, as numerous police teams began arriving at the scene, about three miles from the University of Colorado campus.

Videos from the scene broadcast by local television stations showed a bearded man in boxer shorts being handcuffed from a store and thrown into an ambulance. According to those recordings, it appears that the suspect had a bloody leg.

Witnesses in Colorado described a chaotic and frightening scene in the store.

“It was pretty scary,” witness Ryan Borowski, 37, said. “The fastest firefighting exercise I’ve ever been to,” he added.

Sarah Moonshadow, 42, was at the box office with her adult son Nicholas when the shooting began.

The Boulder shooting suspect has been arrested.

Anticipating Police report stating he has a “food addiction” and “had a really bad day”pic.twitter.com/COISBb2jrv

Moonshadow said she tried to help the victim she saw lying on the sidewalk in front of the store, but her son dragged her away telling her, “We have to go.”

In Washington, White House Secretary Jen Psaki wrote on Twitter that President Joe Biden was aware of the shooting.

Congresswoman Nancy Pelosi, the Democratic leader of the House of Representatives, said the case reiterated the need for stricter gun laws, which stalled in Congress amid the Republican opposition. 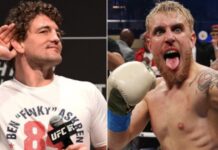