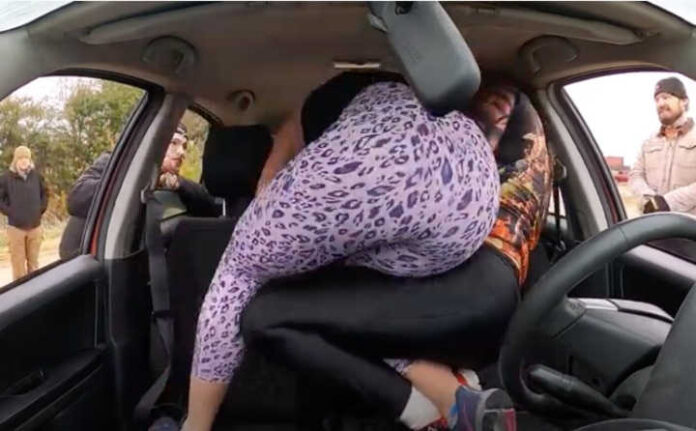 What do you get when you cross Jiu Jitsu and a Car? You guessed it, Car Jitsu! This new way of practicing Jiu Jitsu is quickly gaining popularity and has been sweeping the people training in BJJ. If you’re competitive by nature, love cars, or just want an exciting hobby that will challenge both your mind and body then this way of fighting is for you!

Ever since Jiu Jitsu became popular in the early 2000’s, there have been new offshoots of the martial art. One such offshoot is Car Jitsu. Car Jitsu teaches people how to fight while inside a car. The training involves some drilling and sparring on mats with other students who are also learning Car Jiu-Jitsu, but it also includes some practical exercises that take place in cars!

– Car Jitsu can be practiced in any type of car whether it’s a sedan, sports car, or even the family minivan. The only thing that matters is your skill level and how you use your vehicle to dominate your opponent!

– Some people might think that learning how to fight while inside a car is stupid and will make you look a bit offline, but actually, we’ve found quite the opposite. Once you get good at Car Jitsu, your reactions and skills become second nature to where not only are you able to fight like a pro but also you’re able to avoid any kind of danger and attack by instinctively knowing what move to use next!

But why Jiu-Jitsu In The Car?

Before you think about how stupid jiu-jitsu in the car is take a moment to think about some situation where you can find yourself being attacked with or without any particular reason.

Just think about how many situations are there where you can actually get in a fight while in the car or even driving? How many times someone is screaming at you because you forgot to turn on the turn signal, or you changed lanes without warning?

Maybe someone left his car to attack you and you’re hoping that he’ll go away at some point, but he’s not. He suddenly opens up your car doors and attacks you? How would you react? You would try to go out and get 10+ punches in the head while doing so?

What if you’re an angry driver and you provoke someone enough to run to your car just to hit you in the head?

Or imagine that you’re a taxi driver with so many drunk people on weekend nights? It’s really not hard to get into a fight when someone throws up in your car or destroys something in it because he’s drunk or on drugs?

Well, the chances are that you can get attacked in your car, so learning the skills of defending yourself in the car is not stupid as it seems at the first glance.

Unfortunately, a lot of people spend more time in the car nowadays than walking around so the chances you’ll be attacked in the car are pretty high.

When I first saw the Car Jitsu tournament happening in Russia my first thought was I can’t believe someone can be this stupid to even try this.

After that, it took me 5 minutes to figure out it maybe makes sense so I called my friend and told him to come to my pace to fight me in my old car.

I can’t even explain that laugh I heard over my mobile phone and a voice telling me “man, are you drunk or crazy?”

“Just come and let’s fight in my car” – I said while being pretty angry cause I was full of ideas on how to dominate him in the car.

It took him about half an hour to come while I was thinking of good ways to submit him. Actually, it’s not hard to submit him cause he’s not training Jiu-Jitsu at all, but submissions in the car against someone with more than 50 lbs on me could be challenging. But it actually wasn’t.

Submitting someone who doesn’t train in Jiu-jitsu is probably a much easier thing than on the mats.

My car Jiu-Jitsu fights and scenarios

We had many scenarios while we were fighting in the car and I’ll mention some of them.

We did a few more scenarios, but he was completely exhausted for some reason so there was no point in continuing the fighting.

What’s even more important is I couldn’t even feel that it would be any different if he would try to punch and kick me cause there’s really no space for anything but grappling.

With so little space around us, punches wouldn’t really do any harm to me because there would be no power in them.

Car Jitsu tournaments are a bit different cause they have some rules, but for self-defense in the car, Jiu-Jitsu is simply enough to not get beaten and dominate your opponent. Of course, if I practiced it with someone training in Jiu-Jitsu it would be much harder and messy, but then the one more experienced would win, right?

That actually means you have to train something if you want to be good at it and as I mentioned before there are several reasons why to be good at car jiu-jitsu.

This new type of Jiu-Jitsu tournament is quickly becoming popular.

“Car Jitsu” (jiu-jitsu in the car) is Russians’ latest invention. It is actually a very simple sport. Two fighters are inside the car doing a grappling / BJJ match.

It is a sport that is enjoying increasing popularity in Russia, especially because of the YouTube channel Vika Mikheeva, which regularly publishes recordings of matches, but also the best moments from the tournaments held.

Yes, you read well. “Car Jiu-Jitsu” even has its own tournaments, and from the attached summaries, it is clear that the female population is happy to participate in this sport. By the way, Vik Mikheev is a black belt in BJJ and Judo, and some of the videos on his channel have reached over 100,000 views.

Otherwise, there are certain rules for such matches. The fight lasts two rounds, and each of the fighters starts one round from the driver’s seat. Dominant positions and submissions are scored. The seat belt, steering wheel, mirrors, and all other things in the car may be used as aids during combat.

Make sure to check out the best moments from the first three tournaments in the video at the bottom of the text, and we recommend that you have fun with other videos shared by Vik Mikheev.

If you’ve ever thought about getting in your car and using Jitsu to defeat an attacker, then Car Jitsu is for you! This branch of Jiu-Jitsu competition that is designed specifically for vehicles will teach you the skills necessary to defend yourself if you find yourself attacked in a vehicle. It also provides training on how to use a vehicle as a weapon against attackers.

If you’re looking for an exciting way to challenge your mind and body, give car Jitsu a try! You won’t regret it!

A quick tip for all of you who wants to try it is to disable the horn somehow because when I was fighting my friend I felt like the horn is on like 99% of the time, and it’s a bit annoying when you just think of choking someone in your car. 🙂