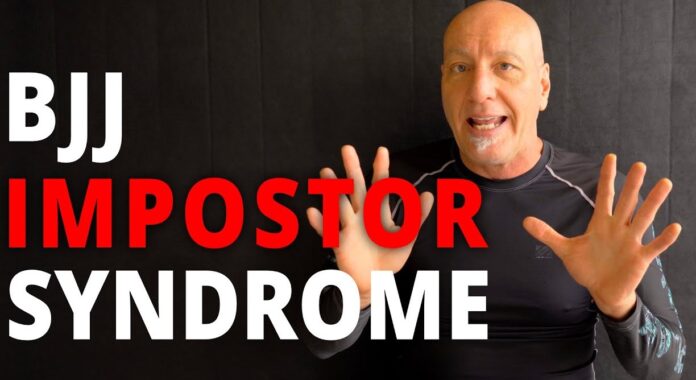 BJJ Imposter Syndrome is a feeling people sometimes get right after they are promoted to a new belt, and it involves feeling anxious like you do not belong at that level.THe feeling is completely normal and there are 2 main periods in BJJ where people get it – at purple and black belt.

BJJ imposter syndrome at the purple belt is a feeling of anxiety and identity issues. Purple belt is when people involved in BJJ become actual experts in the sport. As the saying goes, “a purple belt knows every technique that a black belt does”, purple belts move and feel comfortable on the mats.

As such, they are often the obvious example for a white belt to look up to. Beginners usually both admire purple belts and aspire to be like them, given that achieving a purple belt looks like a much more tangible goal compared to the decade-removed black belt.

The BJJ imposter syndrome comes a lot due to this idolizing of purple belts. When a person gets to the purple belt level, they feel like they are not nearly s good as the purple belts they’ve been idolizing, who by, then, are most likely black belts and are the ones who have promoted them to purple belt.

That breeds a feeling of insecurity in one’s skills and doubt as to whether you are qualified to be a purple belt.

The key to overcoming BJJ imposter syndrome at the purple belt is to avoid doing personal comparisons. By now yo know Jiu-Jitsu is very individual and instructors have good reasons to promote people, even when they do not feel like they deserve the belt.

An easy method to make sure you quickly get over your BJJ imposter syndrome is competing at your new belt level, as well as going to camps, seminars, and open mats in other gyms. Once you see how you fare against other purple belts you’ll understand that you belong there without a doubt.

At black belt, everyone gets anxious. BJJ imposter syndrome hits hard at that level, much harder than at purple belt. Getting a black belt in Brzilian Jiu-Jitsu is a big deal, even if people often downplay the importance. It is a clear symbol of the dedication and time you’ve spent on the mats, which is where its value comes from, rather than how many techniques you know or who you can perform them against.

The truth is that everyone values their black belt, despite what they may say about belts not being important.

Black belt  BJJ imposter syndrome hits when freshly promoted black belts compare themselves to the top black belts in the BJJ world, the ones that seem like they have been black belts since  BJJ started. Of course, someone who got a black belt in 2022 is not going to be at the same level as Marcelo Garcia, who has been a black belt for 22 years.

Being a black belt does not automatically mean you’ll beat all other black belts, or even be able to hang with them. The instructor who gave you your black belt was most likely already a black belt 10 or so years ago when you started, so there’s no need to compare your inexperience at the new belt level to his experience and be all anxious about it.

Once again, participating in competitions, going to camps, and visiting other academies for rolls will show you your true level. It will help you understand that BJJ imposter syndrome is only in your head.

Any time you do something that pushes you to the edge of your comfort zone, you’re discovering who you are and what’s possible. It is understandable to be unsure when something is new., but here is real value in embracing it, which will make you grow and actually get better quickly at your new belt.

And you will start to like going to the edge of the comfort zone, and even over it. As a black belt, you’ll have to keep doing it to avoid the BJJ imposter syndrome anxiety from coming back.

Having BJJ imposter syndrome is actually a good thing. It will help hold you accountable to a very high standard and in front of yourself, your teammates, and your students. The goal is to work hard constantly, and not just achieve that standard, but surpass it. Enjoy the process, and do not give in to the imposter syndrome – it will pass, but your belt rank is here to stay.