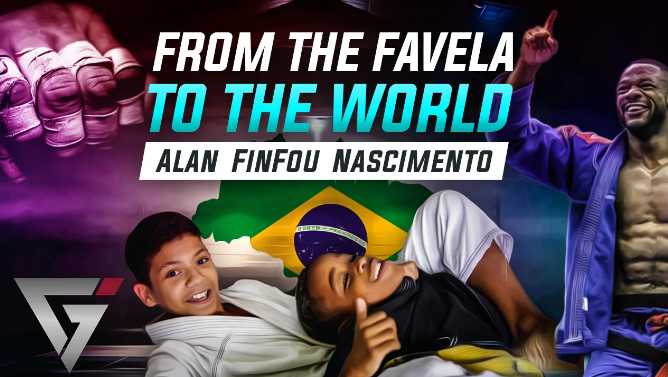 Alan do Nascimento, also known as “FinFou” is featured in a short documentary about BJJ in the Favela. The name of the documentary is:

“From the Favela to the World”

The documentary shows the neighborhood where Alan do Nascimento was raised and where he used to train. It takes place in the Favela of Cantagalo in Rio de Janeiro, Brazil. “From the Favela to the World” features “FinFou”, who exposes the realities of the Favela and how BJJ literally saved his life.

Because of violence and crime, Alan do Nascimento lost his brothers. And it was because of a lucky encounter with BJJ pioneer Fernando “Terere” that Alan started training.

Because of his training and dedication, Alan do Nascimento was able to move out of the Favela, go to Sweden, compete and become an icon of the sport.

However, despite him being able to build a better life for himself and getting out of the Favela, “FinFou” still feels a strong connection to the community of Cantagalo. Coming back to Brazil every time he can. Contributing as much as possible to the community and the children of Cantagalo.

A raw look at Alan do Nascimento:

The documentary is basically a love letter to BJJ and to the power this martial art has to transform lives. When children in dangerous environments are focused on the sport they can build life skills and escape violence.

“From the Favela to the World” is available on YouTube for FREE to anyone who wishes to see it and we encourage everyone to see it. It is a raw dive into the transforming power of BJJ and how it can benefit younger generations in impoverished neighborhoods.

The documentary is short, it is only 21 minutes long but it is extremely powerful. A deep dive into Alan do Nascimento, and into the community that lives in the heart of the Favela.