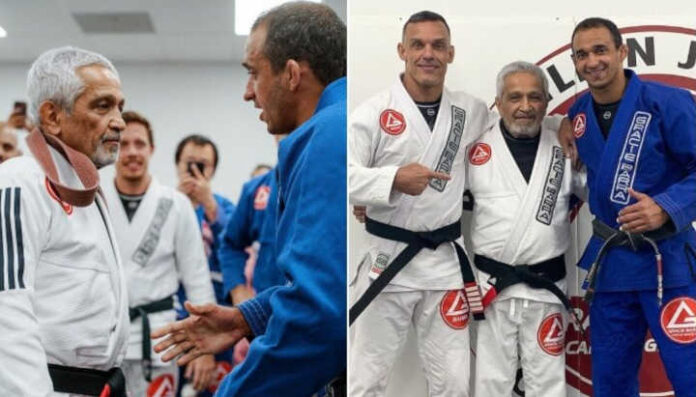 Becoming a black belt in BJJ is something really big considering how much work and will it takes. However, when you manage to earn your black belt at the age of 76 it makes a lot of sense. That is exactly what Robert Aguilar did.

Namely, Roberto Aguilar started training BJJ at the age of 68 and 8 years later was promoted to the black belt under one of the greatest in the sport, Romulo Barral.

During the promotion, Barral gave a delivered speech concluding how Aguilar’s Black Belt was very well earned, and not given:

“What a special moment to promote my student Robert Aguilar to a black belt. Robert started to train at the age of 68 and he made the commitment to get his black belt. And today, he accomplished his goal. Robert thank you to inspire all of us @gbnorthridge and the whole Jiu-Jitsu community. Nothing is given, you earn it.”

Aguilar has been grateful for the promotion himself:

“Promoted to Black Belt today making the dream a reality, embracing my maturity with a light in my eyes and a smile on my face… Thank you, Professors.”

Even Joe Rogan described the success of Robert Aguilar as an “incredible accomplishment”:

“Here’s some awesome inspiration and an enhancement of perspective. This gentleman didn’t start training in Jiu-Jitsu until he was 68 years old, and he just received his black belt from the highly respected Romulo Barral.
An incredible accomplishment!”