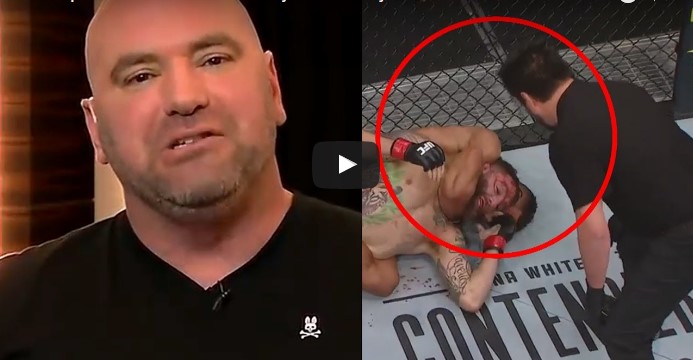 Recently, experienced MMA referee Mario Yamasaki got in trouble for stoping the fight before fighter tapped. This happened when Kevin Lee submitted Michael Chiesa with Rear Naked Choke and Yamasaki jumped in and stopped it before Chiesa was tapping or went unconscious.

Explanation that Yamaski gave was: “The choke was fully locked and Chiesa wasn’t defending himself”.

Dana White doesn’t like Yamasaki for a long time and this situation was just oil on, already, a huge fiire between these two:

“Mario Mazzagatti does it again!!! This guy is more concerned with doing this dumb ass heart bullshit then Ref’n the fight!!! Steals a great moment from Lee or let Mike fight it or tap. Nobody gives a shit that u can make a heart with ur hands like a 12 year old girl they want u to pay attention to what’s going on in the fight and do ur job.”

After staying silent for some time Yamasaki replied to everyone cosidering his desicion wrong:

“It would be easier to just let him be, but I’m a fifth degree jiu-jitsu black belt. I’m sure he went to sleep. Everyone said he didn’t tap, but there’s no tapping when you go to sleep, otherwise he would’ve moved his arm. I only have to move an athlete when I’m in doubt and there was no doubt. I saw a guy who stopped defending himself and going limp.”

“He came back very fast. I was in the moment, there’s nothing I can do. That’s where the confusion and the controversy begin. Dana, as a promoter and an excellent business man, is in his right. He promotes well. I don’t have to say anything. It’s his opinion, he thinks Chiesa didn’t go to sleep. Whoever is in there at the time knows. I don’t need to answer anything. The more I talk about this, the more it’ll grow.”

“I’m used to it. I’ve been doing this for 20 years. What hurt was my kids, nephews and nieces who are little, asking why they’re talking about me. People calling you things can get to you in the first or second day, but we’re tough. You just have to deal with it, there’s no way around it.”

Let’s check the situation in a video.