The Countdown begins, just a few days to UFC 256. The co-main event is the lightweight match between Tony Ferguson and Charles Oliveira.

First, Tony Ferguson should face Michel Chandler, but Chandler canceled the fight. As he stated the recent weight cut was the reason why he canceled. Charles Oliveira steps in, on less than 20 days’ notice. 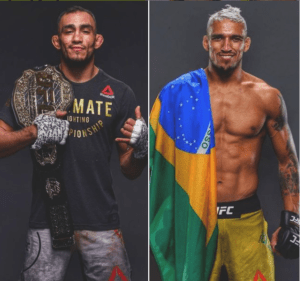 Charles „Do Bronx“ Oliveira, #6 ranked lightweight, is currently on a seven-fight winning streak. The Brazilian fighter has been waiting for a match like this for a long time, and in Las Vegas, he will be chasing his eighth victory in a row against Tony Ferguson. A win in this match would surely put him in the top 5 lightweights.

Oliveira’s last fight was against Kevin Lee, at UFC Fight Night 170, in March. He had a great performance and submitted Lee in the third round via Guillotine choke. After this victory Oliveira extended his UFC record for most submission wins to 14. Also, he extended his finishing streak to 7. This is the longest active finishing streak now, and ties with Donald Cerrone with most finishes in the UFC.

Charles is a black belt in Brazilian Jiu-Jitsu under Jorge Patino. His ground game is very dangerous as we have been able to see in his matches so far. In his 37 matches, he won 29 times, 19 of them by submission.
Will Oliveira be able to continue his winning streak and beat Tony Ferguson? Let’s see on Saturday night.