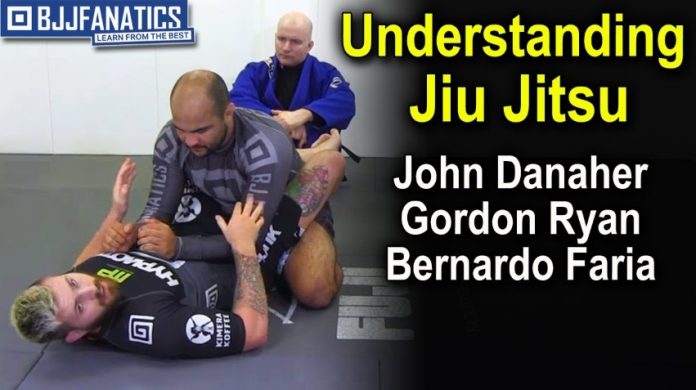 Jiu-Jitsu is a continually evolving martial art that is now required for anybody who wants to practice mixed martial arts or just wants to defend themselves. In this video, John Danaher – one of the most famous and respected Jiu-Jitsu and Mixed Martial Arts Coaches takes 5x World Champion Bernardo Faria & ADCC Champ Gordon Ryan offer an explanation of body mechanics as they relate to Jiu Jitsu.

John explains that Jiu Jitsu is a system that requires 2-6 steps depending on the situation and how much resistance an opponent gives. While both athletes, Gordon Ryan & Bernardo Faria both practice Jiu-Jitsu, they both have different areas that they specialize in. Mr. Ryan is best known for his leg attacks, back attacks and his unique system of passing- all without the gi, while Mr. Faria is best known for his sweeps from half guard and his pressure passing on top – in the gi. To learn Jiu Jitsu you need not be fast, strong, flexible or explosive, you only need to understand the body, how it moves and have the ability to follow directions. Watch as 3 of the best teachers in the art and sport of Jiu Jitsu shed some light on the process. We hope this video and many of the others at bjjfanatics.com help you along your Jiu Jitsu journey.

BJJ Fanatics was started by a pair of black belts (Bernardo Faria & Michael Zenga) who feel that nothing is more important than improving your BJJ skills as much as possible in the least amount of time. Their aim was to create a shop for BJJ Students who don’t look at BJJ as a sport – but as a lifestyle.