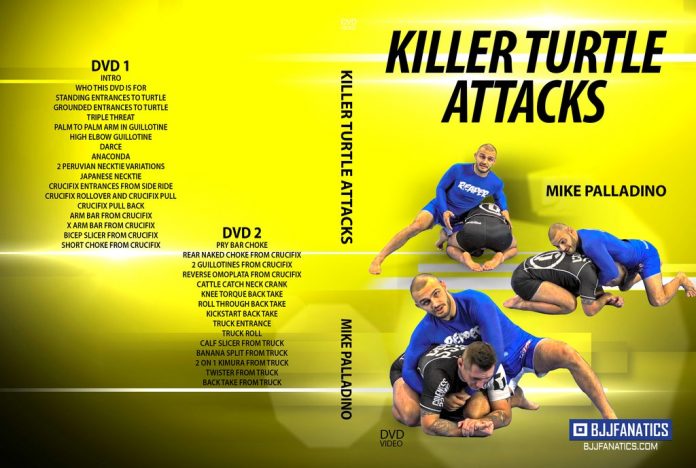 Having trouble dealing with opponents that get into a turtle? Well pick up a number and get in line, s you’re not the only one. As we can see from Judo, the turtle position is defensive heaven if your idea of defense is doing nothing. In Brazilian Jiu-Jitsu there are some effective options for breaking down the turtle, but most of them take time to master. Furthermore, if the opponent is experienced in defending from the turtle, chances are they’re going to escape to guard leaving you frustrated. Luckily, one BJJ coach recognized the troubles that the turtle position causes and decided to do something about it. Thanks to the latest Mike Palladino DVD, you can now learn Killer Turtle Attacks that’ll solve all your trouble.

Mike Palladino is a BJJ coach that got his black belt from Rafael “Formiga” Barbosa. He is the head coach at the Evolution Grappling Academy and extremely well versed in grappling martial arts. Not only does he have a black belt in BJJ but he is also highly skilled in Sambo under none other than Vladislav Koulikov. Some of Mike’s accolades are gold at the Combat Wrestling Championship, 2x Pan American medalist and a host of other titles. So, when a grappler of his pedigree comes out with a digital release on breaking one of the toughest defensive positions in grappling, you should pay attention. This Mike Palladino DVD is one that is going to change the way you see BJJ forever!

Before we get into the meat and potatoes of Palladino’s latest release, let’s see why the turtle position is so tough to break. The turtle position is one very often utilized by Judo Players. By preventing positional transitions, you can prevent losing points to the opponent as well. In short, it is a position to keep you safe from almost anything.

When in turtle, grapplers are essentially on all fours, face facing the floor. The shins and head are the main points of contact with the ground, forming a strong tripod-shaped base. Furthermore, the head is tucked in as far as possible towards the knees. Elbows are placed in the hip folds and the palms are used to cover the neck. The turtle position turns you into a rock-like structure that’s very hard to move because of the strong base. Getting to a neck arm or a leg is also notoriously difficult since everything is so tight. The defensive power of the turtle is that every structure is protected by other surrounding ones, seeing how close and tight everything is.

The downside of the turtle position is that there’s nothing a defending grappler can do from there. Those that have experience in the position know exactly when to get out of it. itis precise timing that makes the position ultimately effective. IF a grappler decides to open up in a specific manner at a specific moment, they’ll get to the guard or half guard position with ease. At the same time, opening up the position also leads to attacking opportunities for the opponent. The beauty of the Killer Turtle Attacks Mike Palladino DVD is that it deals with both the closed and open turtle position.

What makes this Mike Palladino DVD different from other similar instructionals you might ask? Well, first of all, it is a No-Gi instructional. That means that all the techniques you’re going to see work in every situation. Battling the turtle with a Gi allows for more leverage thanks to grips on the material. Opening up a turtled up opponent in No-Gi takes much more effort (or strategy) and the skills are transferable to the Gi.

Furthermore, Mike presents a submission-based approached by defeating the turtle. The reason this works is that it’s a double attack. Attacking with submissions can end in one of two ways. First, the opponent can tap due to the submission, which is the best-case scenario. Second, the opponent might focus on defending so much that they open up other opportunities. This means you can either switch the submission or transition into a dominant position. Whatever the outcome, you’re going to achieve your goal of beating the turtle position.

The release is divided into two chapters, each on a separate DVD. The first one is mostly oriented on direct turtle submissions. The second one goes over transitional options to improve your positioning before going for the kill. All information is clear, precise and works as a complete system.

Finishing Strategies Against The Turtle

Mike Palladino starts off things by precisely defining the turtle position. After going through its mechanics and structure, he covers the most common entries. In that sense, he goes over entering the turtle from both standing and grounded positions. What follows is the one thing you need to learn from this Mike Palladino DVD – multiple threat attacks. He has a system in place based on a triple threat. One attack is rarely going to work against the turtle. Going for multiple threats is going to ensure you get into a position to catch a submission perfectly.

After the detailed introduction, its time for some submissions! Mike Palladino explains such a wide array of submissions that you won’t be able to choose which one to try first! Front headlock attacks are the quickest way to deal with a turtled up opponent if you can get to the neck. As the triple threat system opens the neck, the first attacks are guillotine variations and D’arce/Anaconda chokes. Leaving no stone unturned, Mike also fills the gap between these two choke categories with neckties. Neckties are some of the most vicious attacks you can do and are very diverse. This makes them the perfect weapon to battle the turtle.

But why stop there? Palladino stitches his attention to attacking by trapping one arm into the Crucifix position. From there, he offers a huge collection of armbars, biceps slicers, and chokes to finish even the most stubborn of opponents. Keep your eyes open for the X armbar from the Crucifix, as it is one of the most effective submissions in BJJ!

Don’t get me wrong, when I write about transitional options I don’t mean that MIke gives up on submissions. All it means is that he likes to improve his positioning in relation to the turtle before finishing. And the best way to do so is going for either the back or the truck.

Transitioning to the back is the most widely used method to deal with the turtle. However, without understanding the position and how it works you’ll most probably fail more than you’ll succeed. Mike’s triple threat method ensures that you’ll leave your opponent no chance to defend. Multiple backs taking options are presented, each specific to a certain situation. Of course, finishing options along the way, as well as from the back are covered in detail!

My personal favorite is the truck transitions. The truck is a highly underutilized position that is incredibly effective. As such it is my preferred spot to go against a turtle. Furthermore, it still offers the opportunity to get to the back, but not before having multiple submission options. Mike explains the truck mechanics and how to get there before switching over to submissions. Calf slicers, the banana split, twister, Kimura and many more complete this incredible Mike Palladino DVD. One thing is for sure. You’ll never get angry again when an opponent turtles upon you.