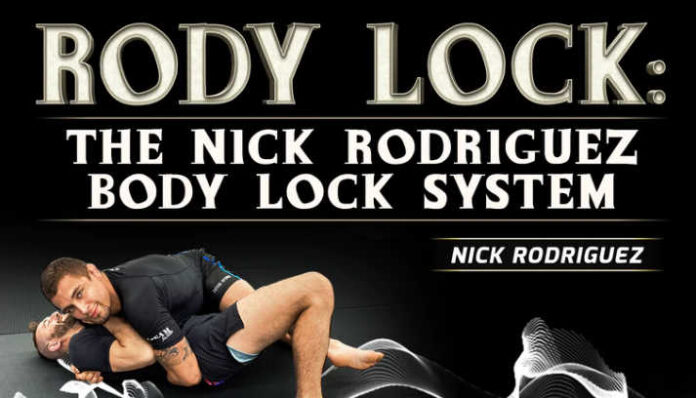 Nicky Rod. Even if this is all I write, you’re probably going to want to go and get this DVD immediately. Such is Nicky Rodriguez’s reputation, and every bit of it is more than well-deserved. HE is a true grappling phenom, one that gives his teammates the likes of Craig Jones and Ethan Crelinsten huge headaches on a daily basis. Imagine what he does to his opponents. Well, now he shares a bit of his signature body lock guard passing system he proudly calls “The Rody Lock”.

This is not just another body lock instructional trying to outdo Gordon Ryan’s famous one. This one might actually be the better option, given Nicky’s wrestling background. It is a blend of Jiu-Jitsu and wrestling body lock techniques, all focused on helping you pin people down while you pass their legs.

The instructional has 6 parts, and instead of offering a dozen different body lock variations that stem into even more different guard passes, it is more of a study of the most basic way you can use the body lock guard pass.

Nicky Rod starts with concepts, moves into ways to get to the body lock, explores grips and how to force half guard, and solidifies the passing position before beating the legs. He also covers solutions to common problems well as a couple of really cool and funny stories.

The “Rody Lock” instructional is No-Gi, which makes it useful for everything, from Gi BJJ to MMA.

Nicky Rodriguez is a purple belt under Jay Regalbuto and one of the most athletically gifted professional grapplers in the world. The 25-year-old beat the who is who of world-class black belts with decades of experience at the 2019 ADCC, and did it as a blue belt!

Nicky started training in wrestling at the age of 12 and had a fair amount of success on the mats at the collegiate level (a record of 34-7). He decided to drop wrestling while pursuing a full-time modeling career. In doing so, he chose Jiu-Jitsu to stay active but ended up so drawn by the sport that he found his career path in it.

Rodriguez began raining under Jay Regalbuto at South Jersey BJJ. HE started competing just three weeks into his training and remained undefeated at a professional level for the next two months.

After a private lesson with Gordon Ryan in 2018, Nicky Rod got introduced to the Danaher Death Squad, which he became a full member of in 2019. After the DDS break up, Rodriguez went on to Craig Jones’ B-Team.

Passing the guard is a subject that is constantly in everyone’s focus, simply because you can’t train BJJ without knowing how to pass. As guards change and develop, so do guard passes. Recently looking into wrestling has become the thing to do for both defensive and offensive Jiu-Jitsu. Body locks are an integral part of wrestling, which is clearly visible in the “Rody Lock” instructional, in which Rodriguez blends wrestling philosophies perfectly with BJJ tactics.

Body lock passing si new to BJJ, hence its immediate effectiveness against most forms of guards. many consider it to be  No-Gi only tool, which I strongly disagree with. The Body lock is a very powerful weapon that you can use not just to pass a guard, but also to pin an opponent to the ground, both before and after you deal with their legs.

The “Rody Lock” contains great information on body lock passing but it is not really intended for everyone. As an amazing competitor as Rodriguez is, he still lacks in the teaching department.

While everyone will find details in this instructional I’d say that it is best suited for people between blue and brown belt. The way Nicky Rod presents the material is organized but lacks cohesion. He shares stuff similar to how wrestlers do, going into detail about the position, but not really connecting the big picture dots.

As such, this is too complex for beginners (apart from those with prior wrestling knowledge) but will lack substance for black belts, especially those that have seen Gordon Ryan’s body lock passing DVD

A BJJ Fanatics production. The quality of the video and audio is in HD. You can acquire the “Rody Lock” DVD in hard copy, or in the form of a digital download.

The instructional contains 6 volumes. Different volumes have different lengths, ranging from 20 minutes to an hour and a half. The entire length of this No-Gi instructional is around 5 and a half hours.

Kicking things off, Nicky talks about the main concepts and foundations of body lock passing. The grips are first up, with Nicky Rod explaining how and shy you should aim to grip and how to transition between different grip configurations.

Rodriguez calls this phase 1 of passing via his body lock system.

Halfway into the DVD Nicky Rod explores how the 2-on-1 grip can help you force half guard from the Rody lock position. In what he calls phase 2, he covers ways to counter butterfly hooks, knee swivels, and crossed ankles.

Nicky also shows how to use the sprawl to open the legs and force half guard without getting yourself into trouble.

this brings us to part four of the instructional where Rodriguez shares phase 3 of his passing system: beating the legs.

Once again, he keeps going based on the previous volume, so he uses the 2-on-1 and a half guard to demonstrate the best ways (according to him) to get past the opponent’s legs.

A basic idea of the direction in which he moves from the 2-on-1 is to elbow pry or holds a tight waist in order to step over the knee line, sprawling as needed.

From the half guard, the head and arm, knee slice and brutal crossface tight waist caught my eye somewhat.

Phase four is all about making sure you don’t give away the position you worked so hard to earn by passing. This volume covers top pinning positions you are familiar with.

As expected, side control features first, followed closely by mount. Nicky Rod also covers scenarios in which opponents try to turn both into and away from you. Something i liked was his take on playing from the 3/4 position, covering options on both the near and far hip.

In the final part of the Rody Locks instructional, Nicky shares some FAQss. he covers common issues like frames, overhead sweeps, underhooks, and the threat of butterfly guard. He offers his take on how to solve all these issues easily.

Finally, he shares a couple of crazy stories, that for me, were the best part of this entire BJJ DVD instructional.

Considering this Rody Lock instructional DVD’s technical aspects and quality of content, we come to an overall score for this instructional that I’ll deliberate in short below.

I like the way the instructional is organized (into the different phases of passing). In terms of the audiovisual technicalities, the DVD is up to the industry standards set by BJJ fanatics. It is also not too short or long, with the total time topping off somewhere around the five and half hours mark.

I’d say it is a high grade, all things considered. Once again, I like that every volume covers a distinct phase of the body lock pass. I am still not sold on it. Moreover, Nicky’s approach, despite the organization in phases is still very technical and scenario-based, covering only very specific aspects of passing in an “if-this-than-that” format.

Similar to most successful competitors out there, the material is based on what works for Nicky Rod, and given his crazy athletic abilities, not everything shown in this instructional is a good fit for most “mortals” out there.

The “Rody Lock” is a good instructional if you like to mess around with the body lock pass. Whether or not Nicky’s approach will work for you, depends on your skill level and athleticism, along with your body shape. if you are similar to Nicky, you’ll most likely do fine. That said if you’re looking for a way to pass the guard, I’d encourage you to look in a different direction. Especially if you araa Gi player.

There is always value in a great competitor’s BJJ DVD instructional. However, manage your expectations as most of the best competitors out there are not even close to being as good teachers as they are fighters. If the body lock is your niche, you’ll find useful info in those Nicky Rod instructional. 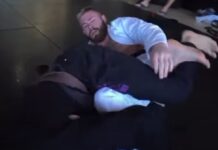 See Gordon Ryan Tapped In Training With The Gi (VIDEO) 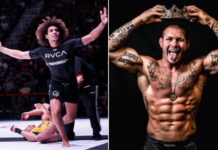 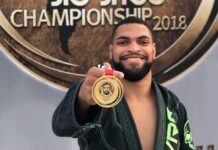 Another BJJ World Champion Shot And Killed In Brazil 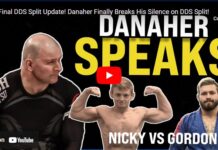