Khabib Nurmagomedov (28-0, 12-0 UFC) plans to prove at the UFC 254 event in Abu Dhabi this weekend that the Dagestani wrestling he represents is better than the American wrestling represented by the former NCAA Division I All American wrestler and current interim lightweight champion, Justin Gaethje (22-2, 5-2 UFC)

“I think there is a big difference. I know he knows how to wrestle. Worries about wrestling for 25 minutes. Today I said (to Cormier): “The last time you fought Miočić, you took his leg once and knocked him down. He got up soon, and you were done. ”The rest of the fight took place on his feet. There is a big difference between me and Cormier,” Khabib told a news conference today, adding:

“If I try to bring him down one day and he successfully defends himself, I will attack him all evening. This is a big difference between American wrestling and Dagestani wrestling. They’re good while they’re on their feet, but when I catch them, that changes. Unlike McGregor and Dustin and other fighters, he knows Croats. It will be a little harder. I prepared for 100 demolition attempts. It will be an interesting Saturday night.”

Nurmagomedov is seeking his third title defense, which he won against Al Iaquinta in 2018 at UFC 223. He has since successfully defended his belt in fights against McGregor and Poirier. Gaethje is undefeated in the last four fights and has celebrated by knockout in all of them. He defeated James Wick, Edson Barboza, and Donald Cerrone to earn the title fight by defeating Tony Ferguson. 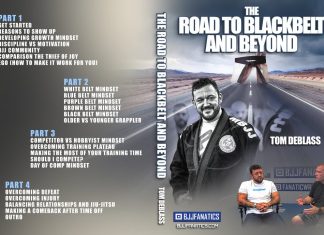 0
I doubt there's a person out there that doesn't like Tom DeBlass. Whether you like his legacy, his MMA career, his BJJ achievements or...