Young Guy Alex was sitting down while being provoked by a fully grown man. At some point, the man kicked him with a knee and that was the moment when Alex decided to take him down. Once Alex took the man down he realized that his threat is not really a physical threat to him due to his Jiu-Jitsu training so he let him go without hurting him.

What happened next is that the attacker didn’t stop and he attacked the young Alex again. The results were the same, Alex took him down again but this time he continued to control him until the man stopped being aggressive.

Alex Williams (IG @alex_williams359) showed how humble a young man he is. He could hurt the guy and do whatever he wanted but he choose to resolve the situation with no harm.

This is exactly the reason why you should get your kids into Jiu-Jitsu & combat sports as it’s pretty unlikely they’ll become bullies. They’ll just become someone humble ready to defend themselves in any situation. 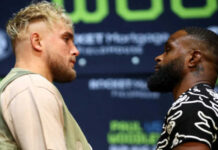