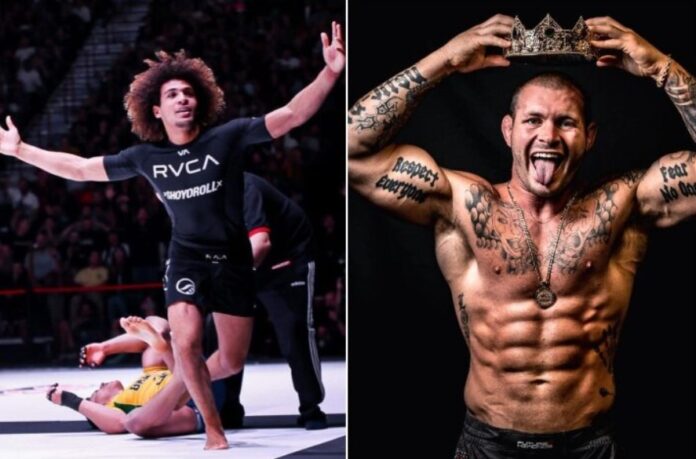 The Ruotolo brothers, who are getting bolder and bolder as they rack up victories, have pissed off Gordon Ryan. Recently Kade Ruotolo said that if he and Gordon rolled, Ryan would be unable to heel hook him, and Tye Ruotolo piled on by asking for the 10-1 odds to face Gordon. They seem to have pissed the “King” off.

“The truth is- I like the kids [Ruotolo brothers]. They were the only ones from ATOS who kept their word when we had the issue with the Modolfo camp filming. They even went against their professor and kept their word to Mo, I respect that.

That’s why I never attacked them and even kept my mouth shut when Kade said I couldn’t heel hook him. But now since I’ve been formally called out, I’ll address it, as always.

Tye called me out asking for the same 10-1 odds I gave Pena. First of all, at this point, any grappler is LUCKY to even have me mention them, never mind stepping on a mat with them. They get more press and more money facing me than they could be doing ANYTHING else in their broke athlete lives.

I offered Tye 2-1 odds- his 50k ONE bonus, vs my 100k, which is a gift since he should be paying me to step on the mat with me seeing as he hasn’t won a single tournament of note at the black belt (yet).

He disregarded that comment and went into a rant about how money doesn’t matter and how I wasn’t confident enough to give him those odds.

Gordon went further offering to fight the Ruotolo brothers back to back while giving them 2-1 odds.

“How about both of the kids [Ruotolo brothers] put up both of their 50k bonuses from ONE, 100K dollars, and I will put up 200k dollars for 2-1 in a no time limit sub-only match.

Put your money where your mouth is, or shut your f*cking mouth.

P.S.: If you’re looking to accuse someone of juice, how bout starting with your friends that fail drug tests.”

It didn’t take much for Ruotolo Brothers to answer Gordon:

“You said you would love a match with us and mentioned that if you were natural and I was roided that I would have no chance, which I took as (a call out). That post had nothing to do with you but you came to talk shit so I replied. I find it funny because you had never won anything before gaining 50+ lbs of synthetic muscle” – Tye wrote on Rutolo brothers Instagram account

“I didn’t reply to your comment to get into a keyboard war. I was replying to have a match with you. I said that our match would be 100% competitive and you disagreed. Your claim sounds stupid to me considering I beat Pedro in half the time you did, not to mention I’m 1-0 against Pena to your 1-2. I’ll give you the toughest fight you’ve had since your supernatural transformation.“

“I thankfully get a great paycheck every time I step on the mats, and it’s never been because of you. My brother and I take pride in being natural athletes and we will be vocal about it anytime we feel like it. We can’t help if that’s a trigger for others.” – Tye added

“You always say you can’t find people to take a match with you and I offered you one. If you want to accept I’ll have my manager message yours. No matter what I’m going to make it exciting. I’m also not gonna sit here and go back and forth with a toxic 30 yr old on social media. I have better things to do but if you want to keep up with the disrespect I hope you keep that same energy when I see you in person.” – Added Tye on Instagram

“Toxic 30 years old”, and “put your money where your mouth” is probably enough for Gordon to accept any kind of match. or maybe it isn’t? We’ll be here to monitor how things will go and, of course, we hope to see a match between all of them. it would be fun.