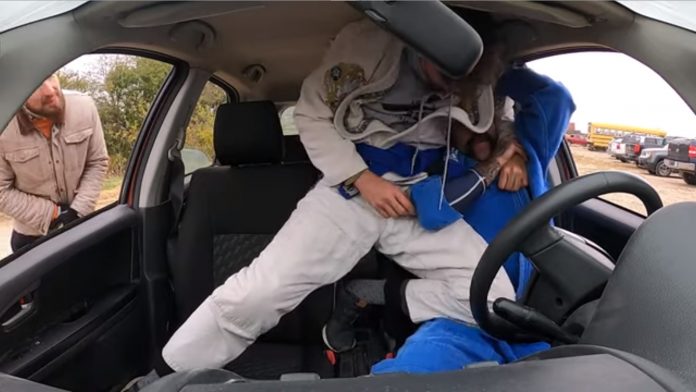 The BJJ World just got a whole notch crazier! I guess lockdown is affecting people in ways we could not have anticipated. Figuring out ways to drill BJJ at home with your loved ones, pets, and even furniture is nothing new. Working on the self-defense aspect of Brazilian Jiu-Jitsu is also understandable. However, doing Jiu-Jitsu in a car, in your Gi, is really taking things a step too far. Or is it? I guess 2020 was not done with surprises, and Car Jiu-Jitsu is certainly one of the major ones.

Would you try to do Jiu-Jitsu in a car? Gi on, belt on, a unique ruleset, and a referee all included? All that’s left is for the car to be in motion and you have the craziest possible BJJ scenario ever. When you come to think of it, it is not really that crazy. Other martial arts, particularly those focusing on self-defense already do drills in cars, covering carjacking and mugging scenarios. And still, Car Jiu-Jitsu is much more than just a Krav maga-type stress drill. Read on!

Contents hide
Car Jiu-Jitsu?
How It Came To Be
The Crazy New Competitive Jiu-Jitsu Arena – Your Car?
One For The Future?

How would you react if someone asked you to do a BJJ match in a car? Exactly, But before we go on to explore that aspect of things, let’s talk cars and fighting a bit more. Well, I guess you won’t expect to find yourself fighting inside a car, it is still something that happens. Full disclaimer here, BJJ will work as a self-defense method even in strange environments as cars, but not against weapons, so at least be honest about things.

That said, being on your toes and ready for everything, even in your car is not a bad idea, and is certainly something we haven’t explored too much in Jiu-Jitsu before. It really does sound like a good idea, particularly for women, and it may end up getting folks out of bad spots.

But what if you could also do a roll, or even crazier, a grappling match inside a car? That is next level craziness, I know, but bear with me. Just imagine Gi, No-Gi, sub only, and all other nutty events that take place in a sports competition format, under the Car Jiu-Jitsu banner. And before you dismiss it all as craziness, know that it does exist and is already a thing!

How It Came To Be

Car Jiu-Jitsu, or more precisely, Car-Jitsu, as a term, came to be courtesy of Vik Mikheev, and Buck Peddicord of Midwest Defense LLC. However, defending yourself in your car by using Brazilian Jiu-Jitsu was already something the Gracies thought of and had researched.

Namely, Rener and Eve Gracie go over a very comprehensive set of scenarios regarding car abductions in one of their self-defense videos. They cover pretty much everything, from being abducted by more than one person in the back seat, or someone in the front seat with just the driver inside. Even scenarios with arms tied behind the back are covered with techniques and stuff that makes sense, and not Steven Seagal stuff.

The Gracia approach is effective, suing superior mechanics, and even stuff that is available and reliable, like the car’s seatbelts. As per their instructions, do make sure you’re not practicing these moves while driving, though, for obvious reasons.

The moment where things get crazy is when someone thinks of doing a Jiu-Jitsu match inside a car. Luckily, for now, the cars are not moving. However, two guys from Midwest Defense LLC decided to put together the first-ever Car Jiu-Jitsu tournament. The thing is, they seem to be on to something there.

The rules were simple. Both competitors start in the front seats. A match has two main periods of 3 minutes each, where competitors switch the drivers and passenger seat sides. The goal, as usual, is to submit the opponent. If the submission score is equal, the competitors then move to the back seat for a deciding 4 minute round, where points also come into play.

The points system is easy, with 4 points for each mount and back control, and 2 points for knee on belly. The fun thing is that seatbelts are considered a legal weapon and can be used in the hunt for submissions, or to stabilize positions.

One For The Future?

I doubt Helio Gracie would approve, but for us, it may just turn out to be the most entertaining way of competing, even if done as a fluke. Especially now, in Covid times, this may turn out to be the only way we get to compete for a while. Who knows, this thing might even catch on, and I know that I for one, am more than willing to give it a try. Would you try Car Jiu-Jitsu? Given that it can be done as a roll too, and the Gi/No-Gi and perhaps even Combat Jiu-Jitsu variants seem really enticing, I think there’s space to grow this.

You Must Watch This Fight – These Kids are Killers