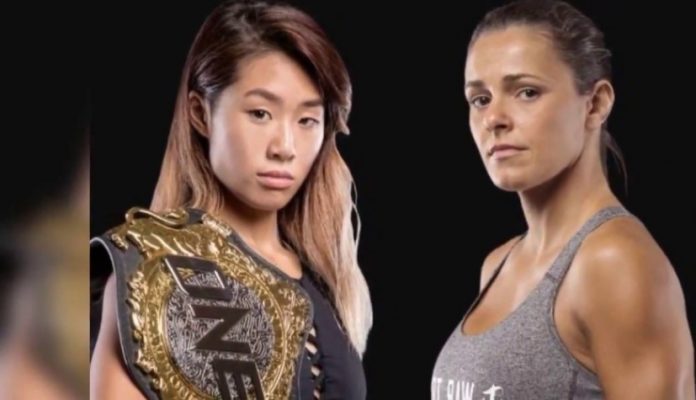 I’m loving the latest wave of Brazilian Jiu-Jitsu champions that are making the transition to MMA. As a grappler, I’ve always followed the careers of BJJ standouts the likes of Demian Maia and the Noguieras. However, up until a short while ago, there was no “fresh blood” when it comes to grappling wizards in MMA. Ryan Hall provided some entertainment during the Ultimate Fighter but has only had a few UFC fights since. Luckily, the drought ended with a whole host of BJJ standouts, from Kroin Gracie to Rafael Lvoato Jr. switching the Gi for 4 oz gloves. Under the ONE banner, another BJJ superstar is about to get a shot at a world title. Will Angela Lee be able to put a dent to the Michelle Nicolini MMA rise?

To be honest, I’ve seen every Michelle Nicolini MMA fight so far. There’s something special about the intensity of women’s MMA in general. When one of the fighters is also a multiple time Brazilian Jiu-Jitsu world champion the fights tend to be that more entertaining. Just take a look at Mackenzie Dern’s MMA exploits so far. Form that crazy Chokoplata in one of her first fights to her undefeated run int he UFC, there hasn’t been a boring fight. the same is true for Michelle Nicolin, once a rival of Dern on the BJJ mats. Now, Nicolini has a shot at Angela Lee, the former ONE FC 115 lbs champion. A win there and we might just see the old rivalry with Dern change scenery, from the BJJ mats to the octagon.

Michelle Nicolini is a name that’s very well known in grappling circles. The Brazilian holds 8 Jiu-Jitsu world titles in the Gi and two in No-Gi. She is also a black beltABud Dhabi, Pans, and double European champion. Nicolini is a black belt under ADCC champion Robert Drysdale. Currently, she is still a part of the Checkmate team, although her focus is not on BJJ tournaments.

Michelle Nicolini is a 37-year-old Brazilian Jiu-Jitsu black belt originally from Sao Paolo. Interestingly, she started martial arts training through Capoeira, which is not uncommon among grapplers. Dabbling in Capoeira led to Jiu-Jitsu, which turned out to be Michelle’s life calling. She has been training with Drysdale her whole career, getting every belt from the grappling legend. She joined Rodrigo Cavaca’s gym in 2010 but only stayed there until 2013 when she left due to “differences in opinion” with Cavaca himself.

From that period onwards, Nicolini’s focus has been MMA. FIghting at 115lbs, there hasn’t been a boring Michelle Nicolini MMA Fight so far, including her two losses. We’d expect nothing less from a grappler that went up four weight classes at the IBJJF Worlds in 2010 as a result of a friendly challenge. She ended up winning the world title in that weight division that year.

So far, Michelle has had a short, but eventful MMA career. After witching her focus from BJJ, the Brazilian had 7 professional fights. Her record so far is 5-2, with the two losses coming by decision. In contrast, all of her 5 victories in three different organizations came via submission stoppages. 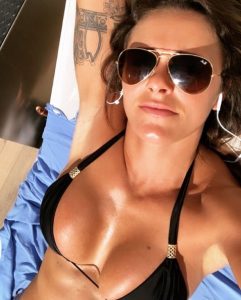 So far, Michelle fought her first fight under the Inca FC banner. She beat her opponent Cristina Mejia via armbar halfway through the first round. Her second fight was in M4TC where another first-round armbar finish got her past Lanchana Green. Legacy Fighting Championship came next, and with it, Nicolini’s first MMA loss. At LFC 36 in 2014, she lost a unanimous decision to Norma Rueda Center. That was also the end of her exploits in the LFC as ONE FC came knocking. Nicolini made the switch and has been fighting there ever since.

So far, Michelle has racked up three wins in ONE FC, all coming via first-round stoppages. Two of those were rear naked choke victories, coming on both ends of yet another first-round armbar finish. Her second decision loss came in her last outing against Tiffany Teo, in November of 2018.

Angel Lee is arguably the biggest test of Michelle Nicolini’s MMA career so far. NIcknamed “Unstoppable” Anglea was the 115 ONE FC champion for the better part of three years. She eventually lost the title in March 2019 at the hands of current ONE FC flyweight champion Jingnan Xiong. That said, both Lee and Nicolini are coming off rare losses and looking to make a point. For Lee, this fight would probably mean an immediate rematch with Xiong. For Nicolini, it will certainly be an opportunity to get a shot at her first ever MMA title. 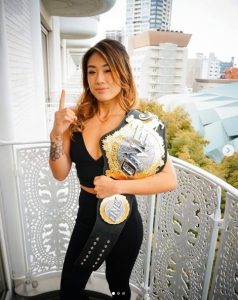 In terms of what we can expect from this upcoming Angela Lee vs. Michelle Nicolini MMA fights the best description is complete and utter fireworks. While not exactly at Michelle Nicolini’s level, Angela Lee is also a BJJ black belt. So far, she has some extremely impressive grappling performances inside the One FC cage. She is also a striker by trait, with a background in Taekwondo,  meaning the fight is going to be exciting both standing and on the ground. When the fight hits the ground be sure to keep an eye out for the submission race. It is going to be Nicolini’s seasoned triangle and armbar attacks vs Angela’s innovative front headlock choke and neck crank submission game. On the feet, the edge probably goes to Angela while Nicolini is the clear favorite in the grappling department. As I said, fireworks.

The fight is scheduled to take place in Kuala Lumpur on the 12th of July. The event is “ONE Championship 98: Masters of Destiny” and the fight is going to be at strawweight.

One thing is for certain, we’re in for a real cracker of a fight! Whether Angela gets a chance to go for the title again, or Nicolini proves she is ready for an even bigger stage remains to be seen. Whatever the case, the July 12 Angela Lee vs Michelle Nicolini MMA bout is one for the history books, so make sure you’re watching! We expect some slick high-level grappling in this one!