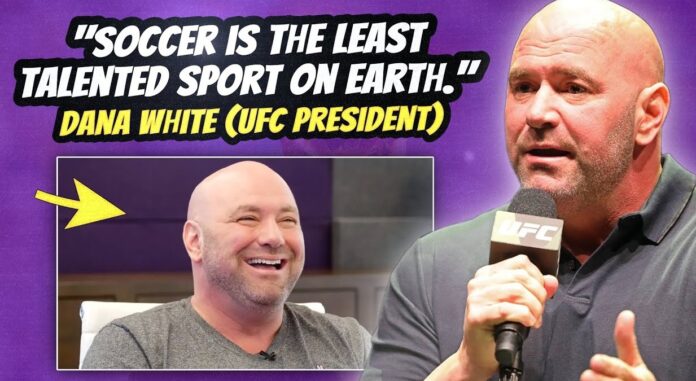 UFC president Dana White is known to have strong opinions on things and is not shy to share them. His latest one has to do with how little respect he has for soccer (football), with the World Cup currently underway in Qatar, by claiming you do need any real talent to “chase a ball around”.

Dana White is a known sh*t talker, not unlike many of his employees on the UFC fighters roster. He does voice his opinions strongly and very rarely changes them.  His latest statement that angered soccer (football) fans around the world were that you have to be very untalented to only score a few goals per game when the goals are so big.

In an interview with the Calgary Sun, Dana White said:

“Soccer? Whole other ball game. Can’t stand soccer, I think that it’s the least talented sport on earth. There’s a reason three-year-olds can play soccer, okay; you run around and kick a ball.

When the report interrupted to tease that Dana White wouldn’t have such a hot take if he were in Brazil, the 53-year-old promptly answered:

“Dude, I say this in every country where you’re playing a game where the net is this big, right, and the score is three to one”

He went on to question how difficult can soccer (football) be when “there’s a reason three-year-olds” can play it.

Dana White went on to compare soccer (football) to hockey:

“Now in hockey, right, you have guys on skates. With crooked sticks, where they have to hit a puck into a net that’s the same size as the goalie. Now that’s the sport where the score should be a 3-1.”

It is obvious what type of sports Dana White prefers given his job and the fact that he recently launched the Power Slap League in the US.

Former UFC fighter Dan Askren is on the same page as white on the matter.