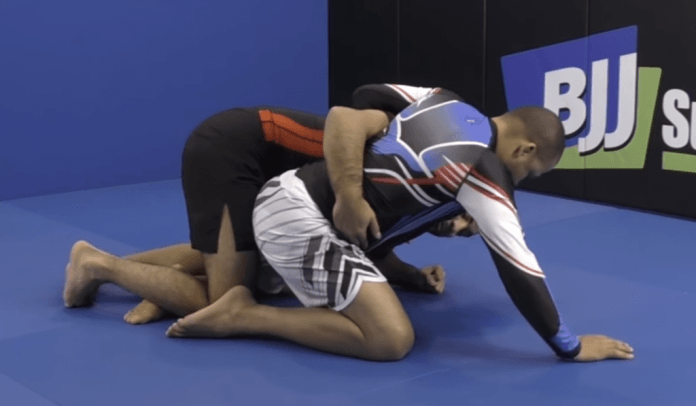 While you might argue that every roll in BJJ is much like a dogfight, there’s actually a specific BJJ Dogfight position. Moreover, you’ve probably already been there, but are probably unaware of it. While the BJJ Dogfight position is just as it sounds, a dogfight, it does offer some really cool options. Today, we’ll be covering the “bottom” position of the dogfight, which is the more attacking of the two. What you need to remember is that this position is much like the 50/50 guard, with both people having lots of options. In that sense, always remain careful and try not to spend too much time in the Dogfight.

The BJJ Dogofgith position is one of those strange sports most consider to as scramble. In essence, it is a powerful transitional position, as long as you know what you’re doing. Some things do come instinctually, like sweeping, but others will require a certain level of experience with the position. Furthermore, you’ll have to know how to get there and stay safe, since your opponent is going to have some quick attacking options as well. All in all, the dogfight is not something you want to pursue, but you definitely want to be know what to do once you end up in it. And that will inevitably happen more often than not.

So what exactly is the BJJ Dogfight position? Let me put it this way – it is the halfway point between the bottom half guard and every successful sweep you execute from there. Basically, it is a position where both grapplers are on their knees. While entangled in the Dogfight, the positioning of the arms is going to determine the outcome. As I previously stated, it’s pretty much a 50/50 situation. However, there are certain advantages to being the “bottom” grappler.

The best route to the Dogfight position is from an underhook half guard. Once you have an underhook, the goal is to get up to your knees. However, the underhook also often meant the opponent tries to Whizzer your arm. This means you reaming connected. This fact is just as helpful to you as it can be dangerous.

So, once you get a deep underhook you need to unlock your legs and turn to your knees. As you do that, you take the inside leg of the half guard out and wide. The knee of the other leg goes behind the knee of the opponent. This is key to obtaining a sound position that an opponent can’t just roll out of.

Now, the key to controlling the BJJ Dogfight position is in the underhook. You need to have the correct grip first, which comes in two main varieties. One is to latch on to the lat muscle on the opposite side and the other is to grab the shoulder. both open different avenues of attack, as you’ll soon see.

When in the BJJ Dogfight position, you’re going to be constantly active. There’s no resting there like in the mount or closed guard. On the contrary, you’re either attacking or defending the position. Going back to half guard is certainly an option, but it will take you a step back instead of forward.

Before exploring some attacking options from the BJJ Dogfight position, let’s look at some defense staples. In terms of base and posture, you’re both in pretty much the same position on your knees and with one arm posted on the mats. The battle is determined by your underhook or the opponent’s Whizzer. In that sense, headlock attacks are very readily available to your opponent, particularly D’arce choke attacks. The positioning of the legs also opens up rolling kneebars to them, so you have to stay wary of these two major threats.

A good underhook with tight elbow control will go a long way to deter any imminent D’arce attacks. Conversely, a strong base with your weight towards your heels, along with the underhook, will prevent quick rollunder and leglocks. Apart from that, you have most of the upper hand, even though you’re the one with an underhook.

This is one of the slickest attacks you can do from the Dogfight position. Wristlocks are sneaky anyhow, and even though they’re legal from blue belt onwards, even black belts rarely expect them. They’re notoriously underrated for such an effective submission hold. For this move, aim for an underhook that ends up with a grip on the shoulder rather than the lat.

The BJJ Dogfight position offers an attractive entry into a really tight wristlock. Moreover, the entry ensures you end up on top, even if the wristlock fails. For the wristlock, you’ll first have to get a hold of the opponent’s Whizzer arm. What you want to do is use your free arm to catch the wrist of the opponent. then, sneak your underhook out and back and close a figure four with your arms. For the roll, go over your far side shoulder. You’ll end up in an Omoplata like position with a tight wristlock finish.

The easiest and most basic half guard sweep is actually one that is executed from the Dogfight position. While you might not know much about the position, you’ve certainly done this sweep.

The moment you find yourself on your knees, with an underhook in, your goal is to off-balance your opponent. The angle that the underhook provides is a great one for sweeping people in all directions, the easiest one, though, is towards the underhook. For that, you’ll need to use your free hand and grip and pull the opponent’s far side knee. This is really going to compromise their base and allow you to push forward and end up on top. 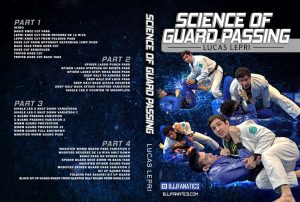 Attacking the headlock is harder when you’re starting off with an underhook, but it is by no means impossible. Quite the contrary, headlocks form the BJJ Dogfight position are high percentage attack that ensures you end up with either top position or a tap.

For the headlock entry, the crucial thing is to widen your base before you transition into the headlock. That means extending your far side leg outside, similar to how you hold your leg when in the knee on belly. The next step is using the underhook to pull towards you and wrap the head with your free arm. You’ll also need to switch your hips slightly so that they face the opponent. How you proceed from there is up to you. You can use the head wrap half Nelson position you’re in to sweep, the transition to chokes or other dominant positions.

One of the coolest submission entries from the dogfight. It is also one of the easiest to mess up and end up on your back. However, when you get it right, you end up with one of the most attractive triangle entries apart from flying triangles.

This setup is another one that relies on having a shoulder grip with your underhook arm. Actually, with this one, you need to connect your arms around the opponent’s neck. Once again, you’ll need an extended base with an outstretched leg. In order to get the triangle from here, you’ll have to go to the opposite direction first. this will have your opponent moving upwards, which in turns opens up space for you to thread the far side leg into a triangle position. How you finish from the triangle is down to you.

The spiderweb position is one of the most versatile attacking positions in BJJ. While most people perceive it as only an armbar position, it offers much more than that. But that’s a subject for another article. Now, we’ll focus on obtaining the spiderweb from a dogfight.

Once again, this is an attractive transition that requires you to be quite agile. It is not hard at all, though, and as long as it is technical, anyone can do it. Having an underhook mean you’re in a good position for an armbar, after slight adjustments. The most crucial adjustment is sneaking your arm back towards you. Make sure you do it fast and with a loose arm so that the opponent doesn’t get attacking opportunities. Once you have the arm in, you already have an armbar entry. All you need to do is throw the near leg over the head and roll over, pulling the opponent into a spiderweb.

The BJJ Dogfight position is a great attacking pitstop for everyone that likes to play half guard. In essence, there’s no playing offensive half guard without it. It doesn’t matter if you like Z-guard, lockdown, or another half guard variation. The Dogfight is the nexus for all half guard attacks that work. So make sure you give our attacking options a try, to help you get more out of the position than just a sweep.